Disaffection is a perennial problem for politics; the way democracy is understood contributes to that problem 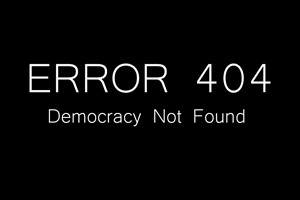 Disaffection is a perennial problem for politics; the way democracy is understood contributes to that problem

The OECD reports that voting rates are falling in member nations and shows that turnout for the last UK general election, at only 61%, was well below the OECD average of 70%.

A House of Commons Library note describes ‘a large decrease in reported membership of UK political parties over the post-war period’ and how, since 1983, the proportion of the population who are members of political parties has fallen from 3.8% to 1%.

Trust in governments is low: a Guardian/ICM poll found that ‘European citizens do not trust their governments’ and, according to Democratic Audit, only 55% in the UK feel that ‘people like them’ could ‘change the way the UK is run’ if they were to get involved in politics.

Yet, as formal participation in politics falls and a sense of disempowerment becomes rife, political leaders talk up democracy and their own democratic credentials. The gap between what people hear from politicians and what people feel about politicians is a problem. It is a problem for government, and all centre-ground political parties, but is a particular problem for the centre-left: it leaves a gap for a populism that is not progressive.

The last Labour administrations felt and tried to address this problem. ‘Democratic renewal’ was a powerful and recurring idea for Labour in government. It was a phrase that it attached to many of its reforms of government. Why, then, does disaffection and its symptoms remain? Partly due to the actions of the present coalition government, of course, but given the long term trend, the malaise also runs deeper than that.

Previous research I’ve carried out (see here and here) reveals important absences in the way that professional politicians tend to describe democracy. Very often democracy is spoken or written about with no reference to ‘the people’ (or any similar phrase) and so fails to acknowledge that democracy is about those groups which are beyond government and are without formal power.

It follows that there is also an absence of any recognition that democracy is a specific type of relation between government and the people: one in which the powerless ‘bite back’ at those with formal power and that when they do so they do it with good cause.

Conversely, professional political use of the term has tended to see ‘democracy’ as taking place only within the institutions of Westminster and as being a property of government rather than something to which government might be subject.

Holding this view, even when attempting to renew democracy, makes deep rooted reform improbable. Labour could change this but in order to do so it must not fall for those prevailing ideas about democracy which have undermined it.

It must recognise that government and democracy are not the same thing as each other. A distinction between the legitimate, mandated, business of government on the one hand and the potential for democratic action from beyond government means two things for a party in government.

First, it means that the business of a party in government must be founded on the values of the party, values which resonate with its broader constituency. It must defend those values and the policies for which it has a mandate and it must resist the lobbying and conniving of opposing vested interests.

Michael Farrelly is a lecturer in English Language at the University of Hull and author of Discourse and Democracy: Critical Analysis of the Language of Government, Routledge