A contributor to right-wing Breitbart website has called for Americans to "start slaughtering Muslims in the streets" on Twitter. 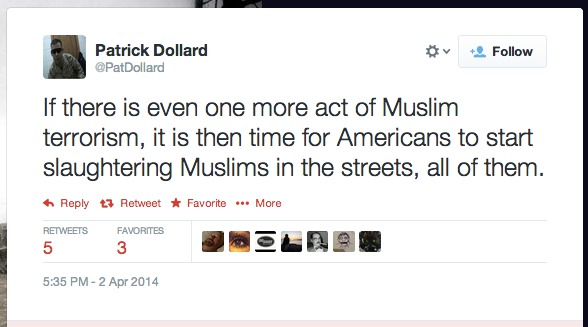 A contributor to right-wing Breitbart website has called on Twitter for Americans to “start slaughtering Muslims in the streets”.

A writer for the American-based conservative website, which recently set up in the UK, made the comment on Twitter as news broke of a shooting at the Ford Hood military base in Texas. There is no evidence whatsoever that the perpetrator of the attack was a Muslim.

Dollard’s Twitter profile lists him as a ‘contributing journalist’ at Breitbart and he has his own author’s page on the website – albeit with no articles.

Breitbart recently started a UK franchise, headed by Telegraph journalist James Delingpole and Raheem Kassam, formerly of the Henry Jackson Society. Let’s hope that none of the writers for the British site share Dollard’s bloodthirsty and racist sentiments.

One Response to “Breitbart contributor: “Time for Americans to start slaughtering Muslims in the streets””