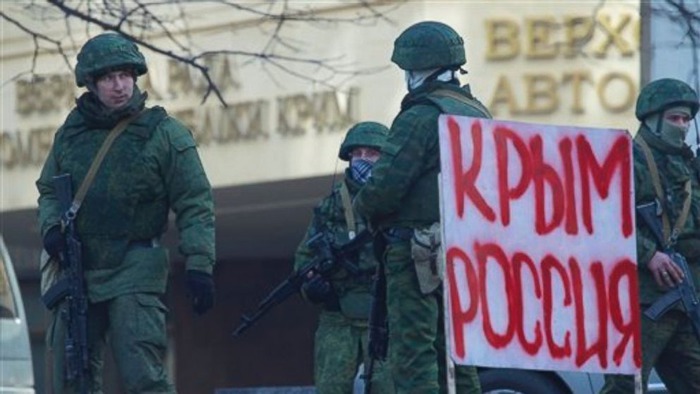 Barack Obama is weighing his options while the G8 has condemned Moscow’s military build-up in Ukraine. James Bloodworth compiles the five best articles on what’s happening in Ukraine.

Following Russia’s invasion of Crimea, Western countries are currently considering how best to respond. But what is Putin’s plan once Crimea is securely in Russian hands?

Left Foot Forward rounds up some of the most interesting opinions.

Vladimir Putin isn’t sending troops into Ukraine merely to protect Russian interests abroad. He’s also trying to protect his regime at home, writes David Satter in the Daily Beast. Both Russia under Putin and Ukraine under Yanukovych share a single form of government – rule by a criminal oligarchy. It is therefore perfectly possible that the revolution which overthrew Ukrainian president Viktor Yanukovych could be replicated in Putin’s Russia, Satter writes. Therefore from the Russian regime’s point of view, the Ukrainian revolution must be stopped at all costs.

Putin’s actions are most likely a case of Russian sabre-rattling ultimately Moscow wants Kyiv to cut some kind of a deal with the Kremlin, writes Mark Galeotti on In Moscow’s Shadows. However if Putin takes Crimea it will be an expensive, Pyrrhic victory. The Crimean economy is not great, and the region receives net subsidies from the centre. It also gives concrete proof to Ukraine and the West of the threat the former faces from Russian bullying. Taking Crimea may not actually be in Moscow’s interests, adds Galeotti.

3. How to Understand Putin’s Ukraine Strategy

To understand what motivates Putin’s action in Ukraine we must understand three considerations that make up Russian foreign policy: Russia as a nuclear superpower, Russia as the world’s great power, and Russia as the central power in the post-Soviet geopolitical space, writes Leon Aron on CNN. Different Russian governments have different interpretations of the three considerations, and in Putin’s case, the pursuit of these objectives has been far more assertive and at times riskier than those of his predecessors. Ultimately, Aron writes, Putin has operated in accordance with Napoleon’s principle: On s’engage and puis on voit, or “First get into a fight, and then decides what to do.”

4. Why Russia No Longer Fears the West

Europe is run by an elite with the morality of the hedge fund and Russia’s owners no longer respect Europeans the way they once did after the Cold War, writes Ben Judah at Politico Magazine. Putin is supremely confident that European elites are more concerned with making money than standing up to him. Brussels today, Russia believes, talks about human rights but no longer believes in it; which is why Putin believes he can invade Crimea with impunity.

A president who has made clear to the American public that the “tide of war is receding” has also made clear to foreign leaders, including opportunists in Russia, that he has no appetite for a new one, writes Scott Wilson at the Washington Post. Obama has taken the stick option off the table, and doesn’t understand that others in the world have interpreted this as a license to disregard diplomatic and human rights norms. The position Obama is now in over Ukraine has been years in the making, Wilson writes. It is the product of Obama’s record in office and of the way he understands the period in which he is governing, at home and abroad.