The EU-US trade deal could lock in free market reforms and prevent a future government being able to reverse the privatisation of public services. 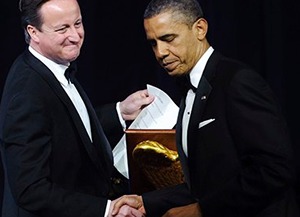 Nick Dearden is the director of World Development Movement

A ‘transatlantic free trade area’ is being negotiated in Brussels this week.

Such a grand-sounding scheme has had remarkably little public attention in Britain. But we need to change that, because the EU-US trade deal could lock in free market reforms and prevent a future government being able to reverse the ‘marketisation’ of public services.

The Transatlantic Trade and Investment Partnership (TTIP) is a key objective of Cameron’s government. Last June, Cameron claimed that a successful deal would add up to £100bn to the European economy, and create 2 million jobs globally. This week US and EU delegations meet in Brussels to thrash out the latest round of the deal in an effort to get TTIP finalised by 2015.

Most contentious is the so-called Investor State Dispute Settlement (ISDS) – a sort of parallel legal system at the heart of the agreement, which gives US companies (or US subsidiaries of European companies) the right to sue European governments for legislating in a way that reduces their ability to make profits.

That is as frightening as it sounds. Once TTIP is agreed, a British government attempting to, for instance, renationalise the railways, regulate private capital in the NHS, or improve trade union legislation could be faced with a lawsuit from a corporation claiming their profit-making ability had been impaired.

The lawsuit would not be heard in British or European courts but by a special tribunal made up of appointed arbitrators from the world of corporate law.  Even if the government won, it would be costly. More than likely, it would give a government of whatever colour enough justification to claim, ‘we’d love to, but sorry we just can’t afford to do that’.

Such mechanisms do already exist in other treaties and are currently being used by corporations to sue, for instance, Uruguay for putting a health warning on cigarette packages, Quebec for placing a moratorium on fracking, Germany for phasing our nuclear energy and Egypt for raising the public sector minimum wage.

But ISDS isn’t the only problem. The central aim of TTIP is getting rid of ‘unnecessary regulation’ by ‘harmonising standards’ across the US and EU. With hundreds of corporate lobbyists pushing on TTIP, this clearly means reducing standards. These standards are often the result of hard won battles to protect people at work, in wider society and the environment.

Brussels has already proposed a Regulatory Cooperation Council which would shape law on both continents. Campaigners at the Corporate Europe Observatory say the purpose of this is to “move decisions on regulations into a technocratic sphere, away from democratic scrutiny… This would be an ideal scenario for big business lobbies, creating a firm brake on any new progressive regulation in the very first stage of decision-making.”

So where are our politicians?

Two weeks ago a debate on TTIP was held in parliament. The Greens and Plaid are strongly opposed to TTIP. There were many concerns raised by MPs from other parties too. Labour MPs particularly called for the removal of ISDS and the exemption of public services. But there was also a willingness to buy into the argument that this treaty will create jobs.

This, however, is to ignore the fact that all investment treaties are sold on the basis of growth and jobs. Look at that most infamous of trade agreements NAFTA (the North American Free Trade Area, between Mexico, Canada and the US). Workers were promised 20 million new jobs. The US actually experienced a net loss of 1 million jobs.

Regarding TTIP, Dr Gabriel Siles-Brügge from the University of Manchester and Dr Ferdi De Ville from Ghent University, have undertaken research to show that the job and growth figures are “vastly overblown and deeply flawed”.

And of course the competition between workers means massive dislocation of industry and often worse bargaining positions. The EU’s own impact assessment talks of an “initial shock” followed by the decline of some industry and “prolonged and substantial adjustments”.

Unions including UNISON and GMB are already active in opposition to TTIP, as are environmental groups like Friends of the Earth and anti-poverty groups like WDM. And that’s small scale compared to the opposition that now exists among unions and Democrat Party members in the US, as well as substantial opposition in Germany.

It’s time for Labour to join this progressive block and come out against TTIP in its entirety. A few exemptions won’t change the fact that the jobs argument is so much hot air created to cover the fact that this is an agreement all about giving big business more control over our society.