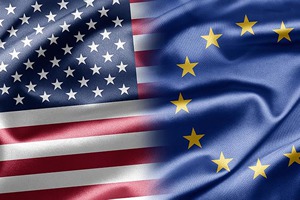 Across Europe, opposition to the looming US-EU trade deal is growing. The ‘Transatlantic Trade and Investment Partnership’ potentially hands big business unprecedented power to resist the policies of elected governments in a wide range of areas, from product safety standards and fracking to the role of profit-driven firms in the NHS.

Quietly published last November, a barely noticed official report commissioned by the Department of Business, Skills and Innovation offers the best analysis of the deal, systematically demonstrating a devastating attack on democracy and progressive politics.

The report chillingly argues that “an EU-US investment treaty would impose costs on the UK to the extent that it prevents the UK government from regulating in the public interest”, focusing on the effects of ‘investor-state dispute settlement’.

International tribunals would be created through which US companies could sue the UK government for lost profits if policies and regulations deviated from broadly defined ‘free trade’ standards. The likely scope is incredibly broad in the absence of safeguards for policy areas such as healthcare and utilities.

The sheer scale of US-UK trade means that “the likelihood of disputes between US investors and the UK government is high”, especially because “American investors tend to be the most litigious in the world…including in politically sensitive cases”. Consequently, the authors predict that “the UK would be regularly faced with US investors opposing new UK government policies on the grounds of the treaty”.

Although these disputes would often be settled in the UK’s favour, the mere threat of legal action would sometimes be enough to change policy since the government has clear incentives “to settle the case, even if only to avoid litigation costs”.

The concept of “reduced policy space” is used to summarise this impact, an Orwellian way to describe the extent to which the ability of society to collectively achieve certain social goals would be put beyond the reach of the ballot box.

Disturbing international precedents justify these fears: tobacco giant Phillip Morris sued Australia for introducing plain-packaged cigarettes; a Dutch insurer successfully sued Slovakia for reversing health privatisation; and there have been scores of challenges against Canada under NAFTA on issues ranging from electricity regulation to export bans on hazardous waste.

The report’s conclusions about the over-hyped economic benefits of investor dispute mechanisms are equally compelling, bluntly stating that “in sum, an EU-US investment chapter is likely to provide the UK with few or no benefits” since “investors have generally not taken much notice of investment treaties in the past when deciding where, and how much, to invest abroad”.

Basic democratic principles could be sacrificed for negligible economic benefit. Campaigners justifiably fear that the deal amounts to a ‘Corporate Bill of Rights’, giving big business entrenched legal rights whilst further eroding the ability of citizens to democratically choose the type of society they wish to live in.

The deal should therefore concern everyone who believes in democracy, but it should be particularly unsettling for the Left as the potential for progressive politics is quietly smothered under a layer of anodyne, technocratic jargon like ‘harmonisation’ and ‘streamlining’.

Despite the far-reaching consequences of the deal, this vital European issue has been drowned out in the UK by the noisy debate about an in-out referendum.

Most Conservatives are unlikely to criticise a business-friendly EU initiative which fails to conform to their image of Europe as a socialist conspiracy, whilst UKIP have been remarkably quiet on the issue so far.

Labour is left with an opportunity to seize on the issue and secure a democratic mandate to alter the deal in the upcoming European election, a concrete example of a progressive and constructive role for Britain inside the EU. There have already been encouraging hints of unease within the party, such as Andy Burnham’s call to exclude the NHS from the deal.

This trade deal should be made the central issue of the election – not the in-out debate – especially since it coincides with the European Commission’s concession of a three month ‘consultation’ phase due to “unprecedented public interest”.

Past European elections have tended to be almost apolitical affairs, typically lacking debates about specific policies or even serious dividing lines between the major parties. However, if Labour allied itself with the European-wide movement opposing the deal, these elections would be different.

May 2014 would become a chance to send a strong, unambiguous message to negotiators who would let big business regulate and restrain the ability of the ballot box to achieve social change.