The British public overwhelmingly believe those who are dying should be given control over their death. 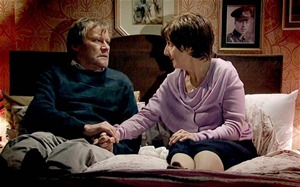 By Mickey Charouneau of Dignity in Dying

Assisted dying is at the forefront of public debate again due to a storyline in the ITV soap Coronation Street where Hayley Cropper, suffering from pancreatic cancer, has chosen to end her life at a time of her own choosing.

It comes as no surprise that 73 per cent of people polled by the Sun would support a change in the law to allow assisted dying for people who are terminally ill, while 69 per cent would want the choice for themselves.

Regardless of the question or who asks it, opinion polls have consistently shown that the British public overwhelmingly support the right for those who are dying to be given control over the manner and timing of their death.

This debate is timely as it comes ahead of Lord Falconer’s Assisted Dying Bill, which is due to be debated in the House of Lords later this year.

Support for an assisted dying law comes from all areas of society. The most recent British Social Attitudes Survey found 71 per cent of people who identified with having a religious faith were supportive, while another poll conducted by Interfaith Leaders for Dignity in Dying found that 78 per cent of those who attended a place of worship at least once a month backed assisted dying.

The leader of this group, Rabbi Jonathan Romain, says that there is “nothing holy about agony”, and that as a man of faith he believes “in the sanctity of life, not the sanctity of suffering”.

At the end of last year the first survey in seven years to specifically ask disabled people about this issue found that 79 per cent wanted to see a change in the law.

This is important because often assisted dying for terminally ill people is conflated with assisted suicide for those people who are not dying. Many people in the disability community quite rightly want to challenge some of the rhetoric around the ‘quality of life’ argument.

What this ground-breaking survey found is that people understand the fundamental difference that separates assisted dying and assisted suicide. People support the right, when dying, to die well rather than an unfettered right to die.

Medical opinion is not as clear cut as those who are opposed to assisted dying would have us believe. A recent poll by the GP magazine Pulse revealed that more than two-thirds of GPs were in favour of the RCGP (Royal College of General Practitioners) dropping its oppositional stance to assisted dying in favour of neutrality or support.

If polls consistently show overwhelming support for dying people to have the right to an assisted death, why then are people still being denied this choice?

The most common argument is the so-called ‘slippery slope’, where the criteria of such a law would inevitably be extended to those who are not dying.

The evidence does not show this. In Oregon the Death with Dignity Act has been safely working for over fifteen years, and there has been no extension beyond the remit of people with a terminal illness. The proportions of assisted deaths have never risen above 0.2 per cent, and we can estimate this would translate to around 1000-1200 requests in Britain a year.

There are some who seek to criticise ITV and Coronation Street for their coverage, ignoring the fact that situations like Hayley and Roy’s are happening in reality. In Britain you can still face a prison sentence of up to 14 years for assisting someone to die, 29 Britons went to Dignitas in Switzerland during 2013, while many more have to die alone out of fear of their loved ones being prosecuted.

Is anyone surprised that one of Britain’s most watched TV dramas has chosen to highlight this?

Interestingly, 51.3 per cent of Oregon’s population voted for their assisted dying law in 1994 and an attempt to repeal the act three years later was rejected by 60 per cent of voters. Public opinion in Oregon was reflected in their active support for the law when another attempt by the Bush administration failed in 2006, and now 80 per cent of the public support it.

The constant polling of the British public, including today’s poll from the Sun, should be heeded come summer when Lord Falconer’s Bill is debated in the House of Lords.

10 Responses to “The British public support assisted dying. We shouldn’t ignore them”