It’s a rare thing for a socialist to be inspired by something Nigel Farage says. 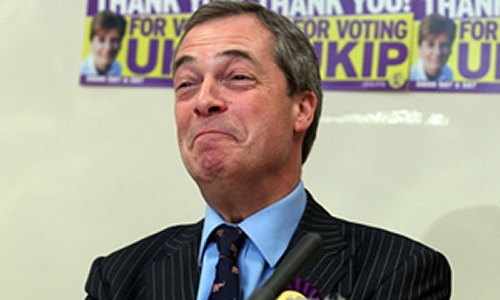 It’s a rare thing for a socialist to be inspired by something Nigel Farage says. Yet, on the BBC Radio 4 Today Programme, the UKIP leader gave a refreshing stance on policy making, downplaying the significance that economic growth should have in our political debate.

Farage spoke of how he would “rather we weren’t slightly richer” but would rather “we had communities that felt more united”. He also admitted that he believed “the social side” to be more important “than pure market economics”.

Of course, Farage spoke in the context of immigration, but despite this, the sentiment has relevance to the obsession with economic growth that hinders our politics – something the left should be more openly critical of.

Despite this, the economic return of healthcare is not quantifiable. Some argue that a successful health service should treat patients so that they can return to employment, and treatment for obese patients is not justified in order to improve quality of life, but to reduce costs by preventing future illness.

Yet all of these economic arguments fail to understand the NHS; they neglect the importance of empathy, bedside manner, and the comfort derived from the fact that the organisation puts people before profit. To reduce our policy-making to such a simplistic, economic-orientated approach is ignorant, counterintuitive and foolish.

Similarly, other projects are analysed on exclusively economic grounds. Consider the London Olympics, whose organisers had to prove an ‘economic boost’ to the country in order to fully justify their project. The inspiration, national pride and enjoyment that the Olympics provided was ignored by many, who were instead keen to see a financial return for their investment.

In the debate about welfare spending, we reduce people to economic statistics. Benefit claimants are perceived as a burden, not vulnerable people who we are proud to help.

Our attitude lacks empathy, and instead demands that the weak somehow provide economic return to our generosity. Rather than taking comfort in creating a society in which the poor aren’t forced to rely on charity to survive, we vilify the welfare state, because it is an apparent ‘drain’ on our financial resources.

We are even waiver our most fundamental liberties in the name of economics. Republicans who maintain that a monarchy is undemocratic and a symbol of social stratification are quickly defeated by arguments of how the British Monarchy benefits tourism, and therefore furthers economic growth.

How bizarre that whilst parts of the world are fighting for democratic representation, we allow our Monarchy to influence and veto decisions on the premise that our unelected head of state attracts capital from visitors.

Our taxation bands, too, are decided solely at a level designed to maximise tax revenue, in what we are told is a pragmatic approach.

Pragmatism may seem sensible, but it is a specific type of pragmatism, solely focused on productivity, economic growth and efficiency.

Whilst happiness is widely regarded as the most important aspect in most peoples’ lives, our so-called pragmatic approach focuses only on economic benefits. It follows that a truly representative government should aspire to improve the well-being of its citizens, instead of just the nation’s economy.

The obvious response to this argument is that economic growth leads to improved well-being, but research shows that this is not true. A study in 1974 discovered that above a certain threshold, increases in GDP had no effect on the happiness of individuals.

Of course, below the threshold, individuals in poverty become happier with increased wealth, but this correlation only continues until a certain point. It is widely accepted that the UK, one of the world’s wealthiest countries, is above this threshold. The discovery that wealth isn’t necessarily reflected in happiness levels gave rise to the Easterlin Paradox, which continues to be supported by further studies.

Furthermore, a plethora of research shows that income inequality within countries is strongly associated with lower levels of well-being, higher rates of drug abuse, violence and mental illness.

It is clear that if the well-being of its citizens is the primary concern of government, our tax system shouldn’t be exclusively focused on maximising revenue, but achieving economic equality, and that this attitude should be reflected throughout all political debate.

Fortunately, politicians are gradually becoming aware of this. Tony Blair investigated the possibility of gauging the public’s general happiness, and in 2010, David Cameron announced plans to measure a ‘wellbeing index’ to complement economic indexes such as GDP.

Yet policy-making is still hindered by an obsession with GDP and economic growth. Ed Miliband’s cost of living campaign is a good start in valuing quality of life above national economic growth, but it is still not enough.

Farage’s comments were clearly misplaced to discuss immigration, something which has benefitted the UK culturally, socially and economically. But that doesn’t mean we can’t learn from what he says. To quote Robert Kennedy: “we seem to have surrendered community excellence and community values in the mere accumulation of material things”.

The left must be clear about this, and our politicians must remember that a policy without obvious economic return isn’t necessarily a worthless one.

6 Responses to “Nigel Farage is right, but for the wrong reasons”