The Unite Union’s two week bus tour ended defiantly in Manchester on Friday with a party in the park to mark the 65th birthday of the NHS. 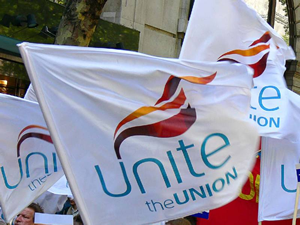 The Unite Union’s two week bus tour ended defiantly in Manchester on Friday with a party in the park to mark the 65th birthday of the NHS.

While a five minute media scrum over the Falkirk selection ‘scandal’ surrounded Unite general secretary Len McCluskey as he arrived at the event, the real story was taking place in Golden Hill Park.

Amongst the relaxed festival atmosphere featuring live music and bouncy castles for children was an uncompromising message that the NHS is not for sale.

Save Trafford General Hospital group leader Matthew Finnegan was first to address the hundreds in attendance, urging Health Secretary Jeremy Hunt not to downgrade the hospital – the first introduced under the NHS in 1948.

Fellow Trafford campaigner and coordinator for the group Jo Harding told me that if the proposals go ahead they will see the A&E close between 12 midnight to 8am every day.

“If this goes ahead, it will mean intensive care will have to shut too as it can’t run without A&E in support,” she said.

Such is the extremism of the government’s health policies, that trade unionists, health workers and local communities have moved past simply pleading and lobbying for a service which they have paid into and benefited from for decades.

Now they are prepared to fight for it with a wide range of tactics.

Unite’s head of health Rachael Maskell said preparations for a national demonstration on 29 September were well under way but she said the union was ready to go further.

“People in small villages, towns and big cities are all rising up, launching local campaigns to defend local hospitals.

“On the 29th we need the country to be there to tell the government enough is enough.

“If they don’t listen, in my view, we will need national industrial action across the country to defend our NHS.”

Interestingly the union is not restricting itself by relying on its industrial muscle and strike action but has made a genuine attempt to engage people suffering under austerity who are from outside the labour movement.

North West region Unite community coordinator Shelia Coleman, who has been on the Unite bus for most of the two week tour, says it has been an opportunity to talk to people largely ignored by the mainstream and to help the union reach out beyond its traditional membership base.

“When we were in Blackpool, the number of young people that came to talk to us was really telling.

“Some of them are so desperate for work; they mistakenly thought we were offering jobs for them.

“But at least they had a chance to come and talk to us.”

From this process she added, people can become part of the union and its campaigns against austerity in general.

“The trick is to provide an alternative,” she added.

Despite the perception that the public is apathetic, millions are hurting under the strain of austerity. Yet the earnings of top the 200 billionaires could eradicate world poverty.

We’re all in it together? Not half Mr Osborne!