Since the demonstrations broke out in Turkey last week, an unprecedented number of articles have been published highlighting the deeper causes of people’s grievances. 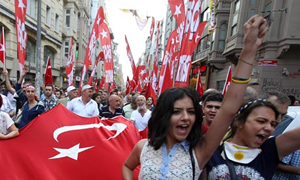 Since the demonstrations broke out in Turkey last week, an unprecedented number of articles have been published highlighting the deeper causes of people’s grievances.

Many analyses suggest that the problems with the rule of law, good governance, democracy and fundamental rights were apparent long before the chants of demonstrators brought them to the surface. But if the problems were so clear, why were so few articles with this focus published before?

In Turkey we know of the lack of press freedom, and of (self) censorship, but in the EU and the US the economic success and the ambitious role of Turkey in the region seemed more attractive stories than the deep polarization in society.

It has taken EU leaders too long to condemn in unequivocal terms, the harsh crackdown of peaceful demonstrations by the police. Some have also used the demonstrations to create momentum to proclaim Turkey can never join the European Union. Despite my steadfast criticism of the flaws in Turkey’s democracy and the rule of law over the past years, this conclusion would be a mistake. Instead of estranging Turkey, we must embrace the opportunity of a tipping point towards greater freedoms, and push for reforms that both benefit people now, and the accession process tomorrow.

In the short term there must be an end to police violence, and an investigation into what happened, to hold abusers accountable, and to prevent a repetition in the future.

The Turkish media’s initial hesitation to report on the demonstrations at all has been visible and acknowledged all over the world. It is essential that there are clear safeguards provided that ensure media freedom and independence from now on. There should be no more censorship, neither online nor offline. The cases of previously imprisoned journalists need to be reviewed, those unjustly imprisoned must immediately be released.

The EU must offer to facilitate dialogue between the government and different opposition parties and movements. The expectations of the government should be clear, we expect tangible engagement to ensure the rule of law, pluralism, democracy and fundamental rights for all people in Turkey. This will require a lower threshold for political parties, so that more people in Turkey can feel politically represented.

Opening negotiation chapters 23 and 24 is a good step to address the rule of law and fundamental rights. The EU has already announced that these elements of the negotiations will be the first to be addressed, and the last to be concluded. This puts the appropriate emphasis on these chapters of negotiations. The previously voiced concerns with due process and fair trial must be reiterated and repeated.

It would help if the opposition parties and movements would become more professional, so that the revolutionary impact of the calls for pluralism and democracy are sustained and don’t fade or end in internal quarrels.

It is not too late for the AK Party government to engage with opponents, and to seek deep reforms. But it will require a major step by prime minister Erdogan, over his own shadow. Just as the demonstrations should serve as a wake up call for him and his government, the EU too should rethink the way it engages with the Turkish government and the population at large.

Instead of turning our backs, and pulling the plug, we should step forward ambitiously. The demonstrations have shown that there is wide support for the kinds of rights and freedoms that are also essential for EU accession.