Despite public support and the medical evidence that plain packaging would save lives, David Cameron has put the interest of his chums in big business above British public health. 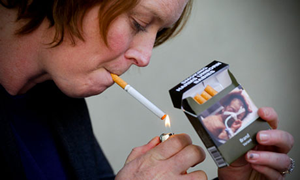 Smoking is a killer. It is still the major preventable cause of death and disability. And it is the biggest cause of health inequality. Poor people suffer most.

We know that plain packaging is in important tool in bringing down levels of smoking. It is particularly helpful in discouraging smokers. Some thought that Cameron’s government wanted to bring in plain packaging. As late as April, the Tory Public Health minister, Anna Soubry said that she was convinced plain packaging should be introduced.

Ireland is now rightly pressing ahead with plans to force tobacco manufacturers to use standardised packaging.

Yet a few weeks ago the Sun’s well connected political editor Tom Newton Dunn reported that David Cameron had scrapped plans to force all cigarettes to be sold in plain packs:

“Mr Cameron has now ordered the proposed law to be pulled from next week’s Queen’s Speech. A Whitehall source said: ‘Plain packaging may or may not be a good idea, but it’s nothing to do with the government’s key purpose. The PM is determined to strip down everything we do so we can concentrate all our efforts on voters’ essentials. That means growth, immigration and welfare reform.'”

Yet again, this exposes real weakness from David Cameron, and it’s yet another humiliating public health car crash.

The hand of Lynton Crosby

The Sun did not identify its source, but the quote bears the hallmarks of the Conservative Party ‘strategist’ Lynton Crosby. In Australia, while Lynton Crosby was federal director of the Liberal Party, the party accepted major donations from the tobacco industry.

Between 2000 and 2010 the Party received $AUS 2.5 million from PMI and BAT. The UK Conservative Party has hired Mr Crosby through his lobbying firm Crosby Textor Fulbrook, which represents tobacco industry clients including British American Tobacco. In Australia, Mark Textor, co-founder of the company with Mr Crosby, was an adviser to the industry in its unsuccessful campaign against standardised packaging.

The UK campaign against standardised packaging is just a part of a worldwide effort by the tobacco industry to defeat what it sees as a major threat to its ‘intellectual property’. In July, 2012 it was reported that the ‘tea party’ pressure group the ‘American Legislative Exchange Council’, which is backed by far right billionaires the Koch brothers, had launched a worldwide campaign against plain packaging of cigarettes.

The power of advertising

Tobacco manufacturers therefore design their packs very carefully, and in particular to try to appeal to new smokers. Standardised packaging would remove virtually all branding. The pack and contents would be a standard shape, size and colour, and health warnings on front and back would be increased in size.

All packs would have a quitline number and web address. All key security features on existing tobacco packaging will also be on standardised packaging, including covert anti-counterfeit marks and numerical codes, making the industry’s claim that it would increase illicit trade as mendacious as every other argument it has employed on this issue.

Lobbying information suggests that there would be a clear majority in both the Lords and the Commons for standardised packaging, in a free vote.  A free vote was used on the introduction of smokefree enclosed public places, and the measure passed in the Commons with a majority of over 200. Opinion polls also show clear public support for standardised packaging. A recent YouGov poll for ASH found that overall 64 per cent of adults in Great Britain were in favour of standard packaging.

Yet despite public support and the medical evidence that plain packaging would save lives, David Cameron has put the interest of his chums in big business above British public health.

It is not too late for Cameron to show similar leadership. He needs to get back on the plane from Ibiza and explain why the government is breaking yet another promise, and why doing the right thing is no longer a priority for his government.