The image of union activist George Tapp lying on a Manchester road with two broken legs and blood pouring from his head following a vicious hit and run during an anti-blacklist demonstration last week has shocked many. 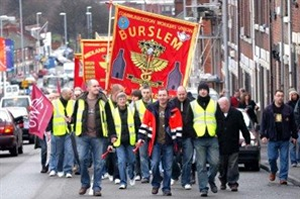 The image of union activist George Tapp lying on a Manchester road with two broken legs and blood pouring from his head following a vicious hit and run during an anti-blacklist demonstration last week has shocked many.

According to eye witnesses, Mr Tapp – a 64 old electrician and anti-blacklist campaigner – was dragged on to a car bonnet for over 100 metres before being flung to the ground by a car driver, angry at having the road temporally blocked by protesters.

Those who witnessed the crime were electricians and militant trade unionists, hardy sorts and stoic types, not easily moved to emotion.

Yet many who spoke to me in the aftermath were on the verge of tears as they described the incident.

One recalled it being like “slow motion”, describing the driver as abusive and pushing his car against Mr Tapp before punching the car into full throttle propelling the 64 year old and two colleagues on to the bonnet.

Further anger has been caused by statements made by chief superintendent Russ Jackson, who claimed that CCTV footage showed protesters climbing on to the car bonnet.

Four witnesses have come forward to tell me that this did not take place and it was the force of the car itself that pushed Mr Tapp on to the bonnet before the car sped away.

The chief supt. also suggested the car drove away “slowly” which, considering Mr Tapp’s injuries, seems highly dubious, as does the claim that a 64 year old climbed on a car bonnet in the first place. Whatever the truth about the events of that day, the statement shows at best a distinct lack of sympathy on behalf of senior officers within the Greater Manchester Police for Mr Tapp’s appalling ordeal and at worst represents an attempt to distract attention from the issue and thus aid construction firms in hoping that the issue of blacklisting will go away.

A Blacklist Support Group spokesman was incredulous at the suggestion that Mr Tapp or any other protester should be the focus of an investigation, saying: “The only criminal offence on the day was the assault with a deadly weapon by the car driver who seriously injured George Tapp.”

“Protesting is not against the law. Blacklisting and GBH both are. The police should spend their time arresting the real criminals the car driver and the blacklisting firms,” he said.

And Salford TUC – a body representing thousands of trade unionists in the area, who have been supporting Mr Tapp while he is in hospital, said in a statement that he was “shocked and dismayed by the initial comments made by the police, which chose to focus on those carrying out a peaceful protest, rather than the actions of a driver who it seriously injured a 64 year old man and then fled the scene”.

Covering this dispute and other construction related issues as I have for three years, I have had the opportunity to witness firsthand the behaviour of protesters.

These are not rioters causing trouble for its own sake or students being a little too overzealous.

They are working people, with families to feed and jobs to do, which they are often denied through the practice of blacklisting.

Where as every one of us, including journalists have had to contend with a failing job market, many of these skilled workers have an extra barrier of being cut out of jobs because of their trade union activity.

And what does this trade union activity consist of in the main?

Electrician and young trade unionist Jason Poulter from Accrington told me that his “militancy” stretched as far as “asking for hot water” on his building site and separate a eating area for the workforce so they did not ingest dangerous chemicals.

The blacklisting scandal has been brought to the attention of the media in parliamentary committees where former business chiefs who had dealings with the Consulting Association – a body that kept thousands of names of worker s on a file, have been grilled by MP’s.

But what has had almost no national newspaper coverage are the protests by the electricians themselves.

There are major demonstrations in every part of the country and internationally every week. Campaigners employ the tactics of peaceful civil disobedience, outside the Crossrail project in London, construction company awards in Scotland, various sites in Wales and even as far afield as the Netherlands.

Their message is simple: that work is a human right.

People like Steve Acheson and others – highly skilled people who in some instances helped construct the Channel Tunnel – have been denied long-term work in the industry they love, and are trained for, for over a decade.

The jobs are there. They either get done poorly by less skilled people or employers exploit labourers from abroad – all in the name of cost cutting.

Denying highly skilled workers the right to contribute to society will only hinder the economic recovery further and bring more pain and misery to many more thousands of families.

Their voice deserves a larger audience than is being granted them at the moment.