At the weekend, the Green Party took a formal step forward to solidify that position, as their spring conference in Nottingham voted with a majority of 71% to amend its constitution to commit to social justice and the “transformation of society for the benefit of the many not the few”. Their constitutional amendment should help strengthen their position as the only significant party to the left of Labour. 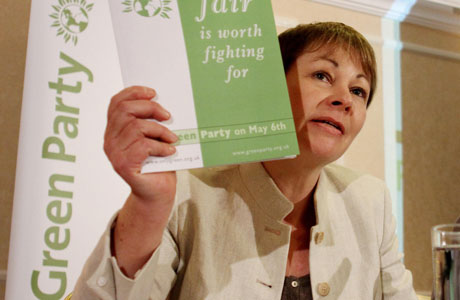 Tonight I will be attending a meeting of Kate Hudson and Andrew Burgin’s new Left Unity project, which will debate the question: why is there no party to the left of Labour?

In the traditional sense, they have a point. The two major projects of the last decade to unite the socialist left as an alternative to New Labour – the Socialist Alliance and RESPECT – never really got past old animosities and internecine squabbling.

But the question – perhaps a little too colour blind in its search for true red – ignores the rise of the Greens as far more than a party for beardy hippy eco-activists and the most successful left of Labour party the UK has seen.

At the weekend, the Green Party took a formal step forward to solidify that position, as their spring conference in Nottingham voted with a majority of 71% to amend its constitution to commit to social justice and the “transformation of society for the benefit of the many not the few”.

The party’s constitution will now call for a move from a “system based on inequality and exploitation” to “a world based on cooperation and democracy”.

But for those who have been immersed in Green politics for any length of time, this will only be a formal recognition of a much longer struggle.

“The Green Party has never been a single issue party,” Caroline Lucas, the Greens’ first MP and former leader told me in 2009.

“We’ve always been a party of social justice, and believe that equity has to be at the heart of a sustainable society. We’ve also always made the case that the best way to protect the environment is to transform the goals and direction of the economy to make it genuinely sustainable.”

Green activist Peter Tatchell says that for more than two decades, the Greens have had a very progressive social agenda.

“Unfortunately, the media tend to cover us only when we campaign on environmental issues,” Tatchell told me.

“That is beginning to change. As a result, more and more voters recognise that we have imaginative policies for a fairer society on a wide range of issues.”

Socialists should be working closer together on their common causes to resist the Conservative onslaught on Britain’s poor, whether that involves coming together to found a party to the left of Labour to help steer the national debate, or working within Labour to push for it to provide a more radical alternative in keeping with its working class roots.

But no one should forget the positive work being done by the Greens, not just when it comes to the environment, but on equality and social justice as well.

Their constitutional amendment should help strengthen their position as the only significant party to the left of Labour.

85 Responses to “Comment: Greens solidify their reputation as the only real alternative to Labour”