There was encouraging news for the Syrian rebels today, with success on the ground and increasing international support. 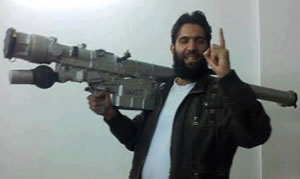 There was encouraging news for the Syrian rebels today, with success on the ground and increasing international support.

The rebels’ capacity to take on the might of the Assad regime has been enhanced by the capturing of shoulder-mounted Surface-to-Air missiles.

Syrian rebels may have more powerful shoulder-mounted surface-to-air missiles than previously thought, if photographs posted by Brown Moses (Eliot Higgins) on his blog are correct.

His photos show a man with what he identifies as an SA-16 (“reportedly captured by Ansar al-Islam from an air defence in East Ghouta, near Damascus”) and an SA-24 (“apparently looted from Babla Base air defence base by Ansar al-Islam”) – “the latest generation of Russian surface to air missiles”.

“As far as I know, this is the first SA-24 manpads [man-portable air-defence systems] ever photographed outside of state control.”

US Secretary of State Hillary Clinton, meanwhile, has announced an extra $30 million in aid, which will help get food to those suffering inside Syria and to refugees in Turkey, Jordan, Lebanon and Iraq.

“As the Syrian opposition takes these steps and demonstrates its effectiveness in advancing the cause of a unified, democratic, pluralistic Syria, we will be prepared to work with them to deliver assistance to the Syrian people.”

“I announce today that France recognises the Syrian national coalition as the sole legitimate representative of the Syrian people and as future government of a democratic Syria making it possible to bring an end to Bashar al-Assad’s regime.”

The French announcement came just hours after Syria’s newly installed opposition leader urged European states to back the opposition so it could buy weapons.

Paris, one of Assad’s harshest critics, had previously ruled out arming rebel forces, concerned that weapons could get into the hands of radical Islamists.

Speaking to Reuters as Arab and European ministers met to discuss Syria at the Arab League in Cairo, Mouaz Alkhatib, the Damascus preacher elected unopposed on Sunday to lead the new group, had asked for diplomatic backing:

And on the ground in Syria, Israel this afternoon said “almost all” the Syrian villages bordering the Golan Heights had fallen into rebel hands.

“Almost all of the villages, from the foot of this ridge to the very top, are already in the hands of the Syrian rebels.”

With the Red Crescent yesterday revealing at least 2.5 million people have been displaced within Syria – double previous estimates and in addition to the more than 400,000 Syrians who have fled to neighbouring countries – the need for greater support for the opposition to topple Assad (in the absence of Western intervention) is clear.