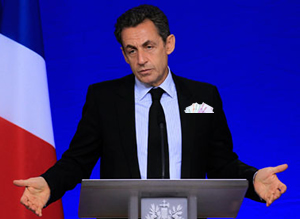 Former French President Nicolas Sarkozy will be questioned by a judge in Bordeaux this week over bribery allegations.

The charge is that Sarkozy – affectionately known as “Mr Bling” – accepted more than half a million pounds from Liliane Bettencourt to help fund his 2007 presidential campaign and promised Bettencourt tax breaks in return.

If the allegations prove to be true, this would be illegal as French law limits donations to parties to 7,500 euros per person per year with only 150 euros to be given in cash.

Sarkozy was known for his lavish presidency, as opposed to the current president Francois Hollande who was dubbed “Mr Normal”.

Bettencourt, who is the heiress of the cosmetics giant L’Oreal and currently the richest woman in France, has had a number of former employees testify against her, stating Sarkozy attended her private residency to pocket the cash deposited in brown envelopes.

Sarkozy, who lost the French presidential election in May, denies the allegations. There are other corruption allegations against Sarkozy who is no longer immune from prosecution following his election defeat, including one that alleges he accepted millions of euros from the deceased Libyan leader Colonel Muammar Gaddafi.

His home and offices were searched in July by French police in relation to the investigations. If Sarkozy is found guilty of corruption, he could face a spell in prison.

One Response to “Downfall of a President: Nicolas “Mr Bling” Sarkozy in bribe scandal”