A look at the corkers in David Cameron's Conservative Party Conference speech today, on the economy, the NHS, the EU, housing benefit, child poverty... 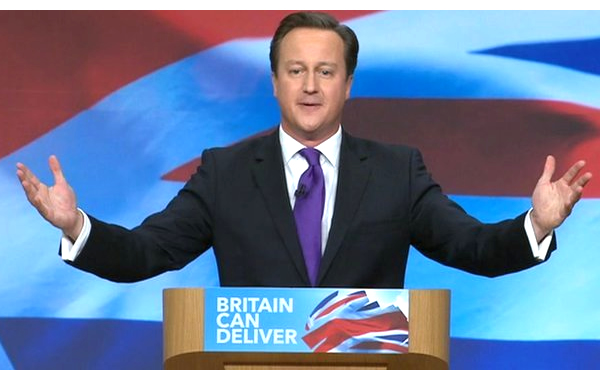 David Cameron made a number of claims in his speech to the Tory Party conference today – claims which unravelled almost as soon as he said them; here’s our list of his major corkers:

Claim: “Here was the challenge: To make an insolvent nation solvent again.”

Fact: Insolvency = “the inability of a debtor to pay their debt” – Britain was not insolvent in 2010.

Claim: “We made a big decision to protect the NHS from spending cuts.”

Fact: The NHS budget has been cut two years running. Official Treasury figures confirm that since 2009/10 NHS spending has fallen from £105,073 million to £104,333 million in real terms.

Fact: The number of people stuck on NHS waiting lists has grown by more than 2,000 every month since David Cameron became PM. Furthermore, 5,500 nurses have been cut since the General Election, that’s 220 nurses a month – that would explain why there was no mention of them.

Claim: “I said no – Britain comes first – and I vetoed that EU treaty.”

Fact: This was the veto that never was, the treaty still went ahead; even the Eurosceptic Daily Telegraph said it “may be the most misrepresented event in recent political history”.

Claim: “Our deficit reduction plan is not an alternative to a growth plan: it’s the very foundation of our growth plan.”

Fact: Only yesterday, an IMF report found the coalition’s cuts had hurt growth more than expected.

Fact: 93% of new housing benefit claimants are in work; Cameron described it as a benefit for the unemployed – but most new claims are made by in-work households.

Claim: “It’s us, the modern compassionate Conservative party, who are the real champions of fighting poverty in Britain today.”

Fact: Looking at child poverty, last December the Child Poverty Action Group warned poor families are facing a “triple whammy” of benefit, support and service cuts. Indeed the Treasury was forced to admit another 100,000 children would be pushed into poverty as a result of the government’s policies, such as freezing the child element of the working tax credit, and research by the Institute for Fiscal Studies forecasts the number of children in poverty would rise by 800,000 by 2020 – despite the government signing up to Labour’s target of ending child poverty by that date.

Fact: Cameron attacks Labour on borrowing, but borrowing is £10.6 billion higher so far this year than last year – that’s £802 higher every second, £277,124,183 higher in the four days of Conservative Party Conference.

Claim: “We made a big decision to go on saving lives abroad too. I know some are sceptical about our aid budget. But picture the scene – you’re in a health centre in Kinshasa. See the child with a needle in her arm, being injected with a Yellow Fever vaccine… the difference between living and dying… how can anyone tell me that’s a waste of money. Since we gathered here in Birmingham on Sunday, British aid money has vaccinated 130 thousand children around the world. One hundred and thirty thousand children. You, the Conservative party helped do that, and you should be proud of what you’ve done.”

Fact: Truly laudable, in the teeth of opposition from the majority in his own ranks, many of whom clapped politely if not ecstatically, some no doubt through gritted teeth – yet Cameron is still to legislate for his manifesto commitment (reiterated in the coalition agreement) of 0.7% GDP on foreign aid, leaving the door open for a future Tory government to de-ringfence aid and slash its budget.

Claim: “We say we’ve got to get the private sector bigger and the public sector smaller…our opponents call it ‘Tory cuts, slashing the state’.”

Fact: For sheer audacity, this claim is right up there with the best – as Polly Toynbee wrote in yesterday’s Guardian, a shrunken state is the prize for this Tory government, “to leave behind a state shrunk beyond recognition”, even if they are only a one-term administration.

6 Responses to “Con 2012: Cameron’s speech corkers: On the economy, the NHS, the EU, housing benefit…”