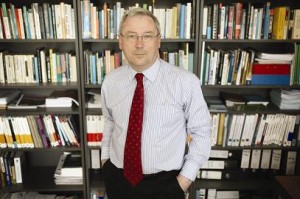 Dr Eoin Clarke nominates Richard Murphy as the most influential left-winger thinker 2011/12; if you’d like to submit a nomination for someone on the left who has made a contribution to advancing left-wing ideas or concepts in the past year, please email [email protected]g

Moral outrage against tax avoidance became trendy in 2012, so much so that even David Cameron attempted to jump on the bandwagon. Away from the front pages, however, many recognise the immense amount of dedication, perseverance and hard work it took to push the issue to the centre stage of UK politics.

No person has done more in the last year to push the importance of tax avoidance as an issue than Richard Murphy.

We in Labour must face up to the fact that New Labour was sometimes soft on tax avoidance, and things didn’t improve immediately when Ed Miliband became leader. When Richard put the case regarding the importance of tackling the black economy to a close advisor of Ed Miliband early in 2012, she dismissed him with a quip meant to diminish the importance of the issue.

Thankfully, not all in Team Ed agreed with her, and Richard spent an important part of his time in 2012 working with Labour on how to move the whole issue forward; 2012 saw Labour firm up its commitments, pledging to take tax avoidance much more seriously and it is fair that we recognise Richard played a part in that.

Few who are knowledgeable in the field would disagree with the statement tax avoidance and its now established unacceptability would not be so salient were it not for Richard Murphy. Such is Richard’s perseverance he would strongly caution us from even concluding any progress has been made at all.  When tax avoidance fades from our newspapers as an issue, you can be sure Richard Murphy will awake every morning determinedly continuing the fight against the hidden economy.

Richard has also had busy year writing.  He embarked upon his book tour for his crucial monograph, “The Courageous State”, and in addition, he authored a chapter in Labour Left’s “Red Book”. Richard maintained his thoroughly empirical Tax Research UK blog that continues to hold a ranking of number 1 in the UK’s financial blogs.

Richard also spoke at many important events throughout the year. For example, he launched Labour Left’s Plan B for the UK economy at Parliament and called for a £20bn stimulus package in the Green Deal and 100,000 homes to kick start the economy. It is with all of this in mind that I am delighted to call him my most influential left wing political figure in 2012.

One Response to “Nomination for most influential left-wing thinker 2011/12: Richard Murphy”