The Conservatives have been quick to jump on the Bradley Wiggins bandwagon - but will they follow up their praise for him with investment in cycling.

The Olympic Games got underway this evening as Great Britain’s women took on New Zealand in the football at the Millennium Stadium, with the opening ceremony just over 48 hours away. 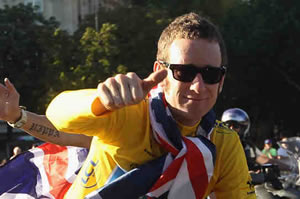 The Games take place against the backdrop of Bradley Wiggins’s incredible Tour de France triumph in Paris on Sunday, the first ever British win in the history of the event – and it wasn’t long before the Tories (along with Ed Miliband) heaped praise on his shoulders.

David Cameron declared himself “absolutely delighted”, sports minister Hugh Robertson called it “one of the great achievements in British sporting history”, and Boris Johnson hailed the “orgiastic celebrations” on the Champs-Élysées.

Boris, in his Telegraph column, also wrote about the “connection between the winning of bike races and the economy” and the “legacy” of the Olympics, with “young people” witnessing sporting excellence “before their eyes, on the grandest possible stage and in the most vivid and exciting way”.

“Of course you need all sorts of things to have a chance of success. You need opportunity. You need facilities – and it is one of the scandals of our time that both Labour and Tory governments allowed the playing fields to be sold. You need people to take an interest in you and coach you.

“But you also need to understand that success – in any field – means drive, and the will to win, and the resolve to do things that are dull, repetitive, uncool and very often painful and exhausting.”

Seldom has he been so right – and how much more credible his piece would have been if he had spoken out against the Tories’ continued selling off of sporting facilities (witness, for example, the shutting down of swimming pools) and savaging of the school sports budget, cuts which, it was revealed last week, has led to a huge decrease (60 per cent) in the amount of time dedicated to organising nationwide participation for pupils.

And it is not just on cycling in school (indeed all school sport) but on cycling generally that the Tory Party’s recent record leaves much to be desired. Conservative London Assembly Members have been accused of jeopardising cyclists’ safety after walking out on a meeting on maintaining the 20mph speed limit on Blackfriars Bridge, while the prime minister, for all his fine words about safe cycling, still refuses to take action to back up his sentiments.

• The push for cycling needs to be backed by funding, not just words 20 Feb 2012

• As Times launches Save our Cyclists campaign, perhaps now TfL will listen 3 Feb 2012

A survey published today by Sustrans shows more than half (56 per cent) of us fear urban roads are unsafe to cycle on and 70 per cent want residential speed limits to be dropped to 20 miles per hour to make them safer.

The health benefits of cycling far outweigh the risks, but as the number of cyclists rise, so have the number of people killed and seriously injured. Instead of accepting this as an inevitable, we must make sure the approach from national and local government will give everyone the best possible chance of a safe journey…

Our briefing (pdf) highlights the key changes that could make cycling safer for everyone from lycra-clad racers to mums on the school run.

Sixty five per cent of those that don’t cycle regularly would be more likely to travel by bike if their journeys are made safer through lower speed limits, more marked cycle lanes and more care taken by drivers and other cyclists.

We desperately need all these things – and the ongoing funding commitment that would make them a reality.

Will the Tories provide that commitment? Will they reverse the cuts to school sport? An Englishman has won the Tour de France, so anything’s possible – but don’t hold your breath.

14 Responses to “Will the Tories follow up their praise for Wiggo with investment in cycling?”