Figures just released by Boris Johnson’s transport body show that he misled Londoners during the mayoral election when he said that my plan to cut fares was ‘unaffordable’ and could only be achieved by reducing investment and services.

My policy of cutting fares was one of the most controversial of the recent mayoral contest in London. I pledged to cut fares by 7%, saving average fare payers £1,000 over four years.

Boris Johnson and his supporters made a series of arguments against this. But they rested mainly on the idea that cutting fares was ‘unaffordable’ and could only be achieved by cutting investment. Independent experts agreed with me that fares could be cut without damaging investment.

The latest Transport for London (TfL) accounts for the full financial year 2011/12 ( see table below) show a budget surplus of £759m. This surplus is far greater than the ‘cost’ of the 7% cut in fares I proposed, which, based on last year’s fares revenues would have been £287m. 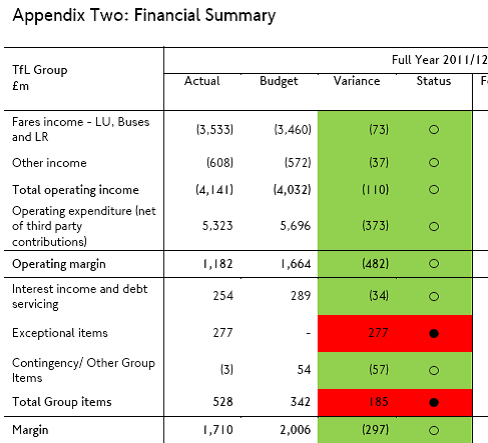 The TfL accounts published last week show another very large surplus on the operating budget of £482mn for the full financial year. In addition there was a one-off payment of £277m. This was not at all part of the original TfL budget, as shown by the black dot in the presentation of the accounts and its complete ‘variance’ with the original budget.

We were told that last year’s surplus of £728m was a one-off. That is clearly not the case. The source of these repeated surpluses is the repeated inflation-busting fares increases from the Tory mayor.

This is entirely in line with the policies of the current government. The mantra that, ‘There’s no money left’ is patently untrue when fares, rents, energy bills, and so on are rising. Companies like TfL, the big energy companies and landlords are all taking more money from ordinary people and keeping it for themselves. That’s why TfL has huge surpluses.

I won’t be in a position to use the office of mayor to cut fares. But the surpluses haven’t gone away. Fares could still be cut.

The Tory mayor will continue with huge fare increases and build up ever larger surpluses. The danger is these will be an irresistible money pot for the Coalition and an open invitation to slash the subsidy from central government. Londoners already face some of the highest fares of any major world city.

Elsewhere, governments of Left and Right recognise the need to support the costs of public transport. The Tory mayor is imposing a stealth tax on the majority. This might get even worse. The Tory-led government should not be allowed to impose a massive new tax on London’s fare-payers.