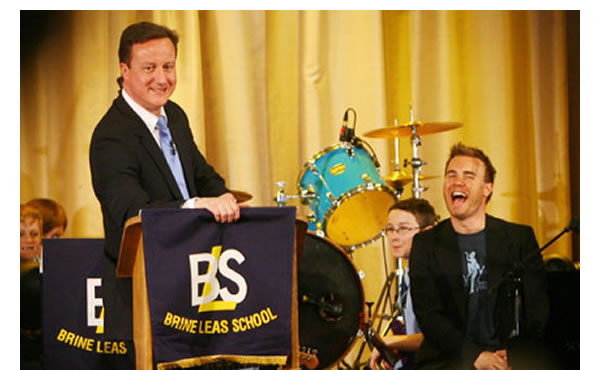 Asked by ITN’s Tom Bradby if he thought Barlow’s “tax affairs were morally wrong and should he give back his OBE”, the prime minister passed up the chance to censure his Tory chum, dodging the tax dodging question by saying he would not give a “running commentary on different people’s tax affairs” as “that would not be right”. By which he means ‘I’ll give a commentary on lefty Jimmy Carr, but not my mate Gary Barlow’.

The Tory leader’s lack of consisteny was mocked on Twitter – with people also pointing to Tory tax-dodger-in-chief Sir Philip Green:

“Trying to dismantle the career of Jimmy Carr while not mentioning Gary Barlow speaks volumes about the schoolboy running our country.” – Coffee Punk

“PM now refusing equal criticism of Gary Barlow over tax avoidance after railing against Jimmy Carr. Is it because Barlow is a Tory?” – Sunny Hundal

“So Cameron has a lot to say about Jimmy Carr but nothing about his mate and Tory boy Gary Barlow. Disgraceful hypocrisy.” – Gavin Callaghan

“Angela Eagle asking about tax avoidance. Why is Jimmy Carr immoral but Gary Barlow gets an OBE and Philip Green gets a knighthood and a job?” – MD

“Dave quick to kick Jimmy Carr (allegedly a leftie, allegedly a comic) over tax but not Gary Barlow (certainly a Tory, allegedly a singer)” – Kevin Mitchell

“It’s amazing how Jimmy Carr get his balls chewed off by Prime Minister while Princess Gary Barlow doesn’t even get a mention.” – Coffee Punk

“It appears Cameron has got himself into a right pickle!Hes thought oh lets ‘go for’ lefty Jimmy Carr but then ooops Tory Gary Barlow pops up” – Ian

“If Cameron is singling out Jimmy Carr, will he throw same accusation at Gary Barlow? No? Funny that. Could it be that Barlow is a Tory?” – Chris Nicholson

• Another week, another Tory tax exile – only this time the Daily Mail sinks him 20 Aug 2010

Cameron’s Tory party looks like its riddled with tax dodgers, avoiders, evaders – cheats, the real “scroungers” in society, and he seems attracted to them, surrounding himself with these shady characters, “all in it together” with the selfish few, saying not a word against them.

Jimmy Carr has at least, at last, belatedly shown contrition – yet the same cannot be said of any of the Tory tax chisellers. Will Cameron ever condemn them? Don’t hold your breath.