The Houla massacre of 32 children is so unimaginably evil it’s time for Western liberal military intervention in Syria to take out President Bashar al-Assad.

A picture is worth a thousand words, so the saying goes.

How many words, then, can describe the shocking, sickening images we’ve seen across our weekend papers and TV screens of the corpses of children and adults, lined up one by one in the Syrian town of Houla, and of families screaming in agony. 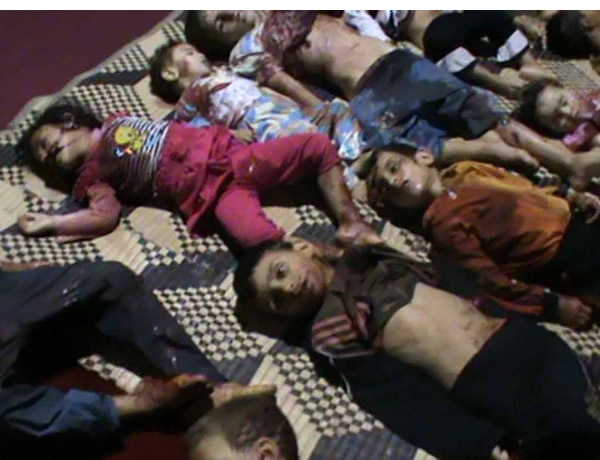 I was left feeling particularly sick to my stomach after seeing an extremely graphic video of some of the 32 children massacred – be warned, this footage is truly unimaginable:

In his description for the Independent on Sunday, Patrick Cockburn wrote:

“Horrific pictures posted on YouTube appear to show that they were shot or knifed to death, some having their throats cut.

“The small bodies of the children were covered in sheets as they were taken by survivors screaming in grief and disbelief from the houses where they had been murdered.”

It is well over a year now since we began to see the uprising in Syria, responded to with brute force by the government of President Assad.

It is clear the peace plan agreed by the former UN Secretary General, Kofi Annan, is now in tatters. Peace was given a chance and so it is now time the international community realised its responsibility and took the military action that is so badly needed to bring Assad and his murderous regime to an end.

This does not come naturally to me. I was sceptical to say the least about the Iraq War and I have no doubt many eminently more qualified people will argue action of this nature would serve to enrage the likes of Iran but I pose this simple case – how many more of these massacres can we bear to watch before we take action?

Had we taken action before this weekend, how many of those 32 children would be alive rather than buried deep underground?

The UN has itself stated it has a “responsibility to protect”. Now is the time to stop the talking and take tangible action to rid Syria of a regime perpetrating sickening acts of barbarity; the international community must uphold the basic universal right to life.

Thirty two children lost their lives over the weekend: how many more must die before we act?

44 Responses to “We can’t sit back and allow more massacres: It’s time for military action in Syria”