Stuart Jeffery, the Green Party’s health spokesman, explains the party’s opposition to the health and social care bill, and the consequences if it is passed.

Of course the Tories are no stranger to privatisation. The NHS is just the next victim in a long history of privatisation and free market fundamentalism implemented by the Conservative Party that has seen energy, rail, buses and the telephone network handed over to private corporations in the name of “efficiency”. 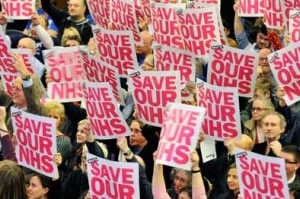 And remember the Orange Book? No one should be surprised at the Lib Dems’ backing of competition and privatisation either.

There are clear examples showing the dangers of privatisation and how it will affect the health and wellbeing of the country’s citizens, yet the coalition government continues to insist on the necessity of their policy.

No wonder there has been fierce opposition from medical organisations, practitioners, NHS managers, doctors and nurses; the impact of the reforms will be devastating.

Under Labour, privatisation with a healthcare market was a key plank in their strategy for the NHS, something the Greens bitterly opposed, but Labour’s privatisation was more stealthy and less brazen than the bold steps being taken by the coalition.

The coalition is also starting from the position that the NHS is broken, and to some extent they are right. Labour has invested heavily in healthcare marketisation and this needed to be reversed and the lack of local accountability combined with a post code lottery for treatment desperately needed addressing.

The health and social care bill pushes the NHS into a market-led National Health Insurance scheme fundamentally undermining its founding principles. The bill paves the way for wholesale privatisation of provision, and rationing will need to be administered by GPs which will damage the sacrosanct doctor-patient relationship.

The dangers of the bill are known to the government but they refuse to share their own assessment despite the legal ruling demanding they do so. This simply highlights either that the government’s arrogance is sufficient for it to ignore the law, mounting opposition and proof of their mistake, or that they are so blissfully ignorant they are willing to put healthcare in insurmountable danger.

As the NHS moves rapidly towards the US system, there was something depressingly poignant about David Cameron being there for Tuesday’s vote. He was of course engaging in cool one-upmanships with Barack Obama in the land where 40 million of its inhabitants cannot afford healthcare.

The NHS is too important to lose and the fight will continue to stop the Tories and Lib Dems wrecking it; voters will not forgive politicians who take away the NHS, it is too big a part of our culture. MPs and Lords should think hard during the final debates on the NHS bill and ask themselves whether they really want to be the people that killed the NHS.

42 Responses to “Lib Dems must ask themselves: Do they really want to be the people that killed the NHS?”