Mike Morgan Giles argues that Tory Baroness Sayeeda Warsi is wrong - we need “militant secularists”, whatever they are. 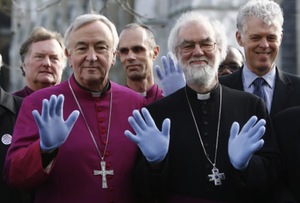 The separation of church and state has recently been in the spotlight, following a court decision regarding prayers being held during government meetings.

The issue of religion, however, stretches far wider than this, and that is where the problems lie, for instance: the existence of 26 unelected religious clerics sitting in the House of Lords and influencing the laws of the country; the Church of England remaining an officially state sponsored institution; and the public purse funding the religious indoctrination of school children.

To be clear – wanting a separation of church and state isn’t about being against the right of those with faith to practice their religion freely in their own time.

It’s about ending the entrenched privilege within publicly funded institutions to those practising religion – in particular, but not limited to, Christianity.

For example, religious schools are allowed to take public money to promote their own religious agenda – but in 2007 when there was an attempt to create a school for those of no faith, this was rejected out of hand.

The unelected 26 clerics in the Lords can have a major impact on the way the country is run. For instance, when there was a vote in 2006 on allowing terminally ill people the right to die, they organised and voted against the reforms.

This came in spite of the fact that in almost every poll on the topic, over 70 per cent of the public came out in favour of changing the law.

Another example of the influence of religion on the political process is the existence of polling stations within religious buildings. A study found that people near a religious building reported “significantly more conservative social and political attitudes than similar people near a government building”. It went on to say that this could “affect the outcome” of a tight election.

Campaigners will claim that religion plays an important role in providing community activities, but recent statistics show that there is virtually no difference in the number of religious and secular volunteers. Another myth pervaded is that those practising religion are more moralistic – but it is clearly possible to live a life based around strong values without the need for a belief in a higher being.

Religious folk often use census statistics to justify unfairness too, with the 2001 data implying that 72 per cent of people are Christians, with just 15 per cent having no religion. Politicians and others often use this ‘official’ data to determine how and where to divert resources and public funds.

However, there are two key problems with this – the first is that the gathering of information from the census on this topic is obtained through asking a leading question – namely ‘What is your religion?’ rather than using a neutral one.

Secondly, to rely on the accuracy of the census question is also to support the premise that ‘Jedi’ is the UK’s fourth religion – above Sikhism and Judaism. People will frequently tick the box saying ‘Christian’, without considering if they are actually one – essentially they were told they were as a child and never thought about it since.

More accurate surveys in fact suggest something very different. The British Social Attitudes Survey instead shows that 51 per cent of people are non-religious, with 43 per cent of citizens being Christian. In fact, only about one in nine people actually practices religion regularly.

Many countries around the world separate church and state effectively, but being separate doesn’t mean religion can be above the law. In the 21st Century, writings on ancient religious scrolls should never subsume genuine laws and be used as a justification for bigotry.

Fortunately, in social terms we are growing closer to this point – for instance, owners of private businesses such as B&Bs can no longer use religious beliefs as an excuse to turn away those they disapprove of. Marriage is now also being actively considered for same-sex couples, which again is a positive step.

However, in the public sphere an issue still remains – the use of public money to fund and support organised religion. People committed to genuine freedom should show a commitment to ending this publicly funded activity and the entrenched privilege that it brings.

• We need to defend the hope at the heart of Christianity, not fight militant secularisation – Ed Jacobs, February 14th 2012