Will Straw compares the UK's record on jobs with the US's: We no longer look so hot. 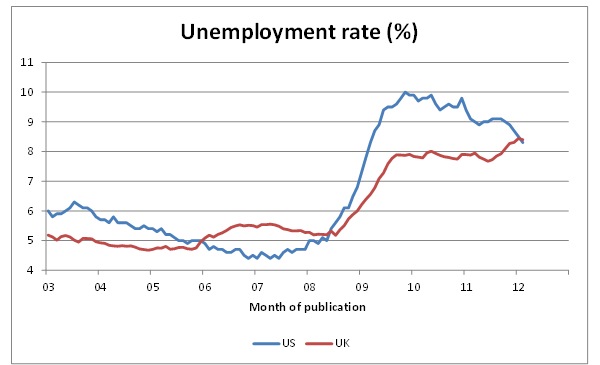 For the first time since the Great Recession began in the second quarter of 2008, the UK has a higher unemployment rate than the United States.

Data out today shows the UK unemployment rate for the period September to December 2011 was up 0.1 percentage point to 8.4 per cent. By contrast, the latest US jobs figures which were released earlier this month, fell to 8.3 per cent.

The graph below compares the US and UK unemployment rates published each month since 2003. UK data is collected on a quarterly basis on a 6 week lag while US data is published for the month just passed.

The UK had been commended during the Great Recession for keeping levels of job losses comparatively low despite the rapid fall in GDP. Schemes like the Future Jobs Fund, scrapped by the coalition government, appeared to hold off sharp increases in unemployment of the kind suffered by the United States. The latest figures show that this accolade is no longer justified.