James Mills looks at the cost of keeping EMA, against that of its replacement, and finds that the latter isn't much cheaper, and is a lot worse, than the former 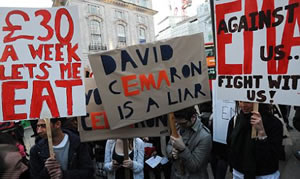 One of the odd things about the government’s new plans to allow private companies to bid for a payment-by-results scheme to try to get NEET (Not in education, employment or training) teenagers into work or training, is that for a similar amount of money the government could have carried on the £30 EMA (education maintenance allowance) payments.

The average annual payment to EMA recipients receiving £30 a week, meaning those teenagers from household’s whose annual income was below £21,000, was £792.01 (over an average of 26.4 weekly payments).

In contrast, the contractors under the government’s new scheme will be paid £2,200 per teenager, with around 55,000 teenagers classed as NEET in that age group being targeted.

However, this NEET figure is based on 2010 figures and since the scrapping of EMA this number has gone up. Even by the government’s own figures, the number of 16-17 year olds classed as NEET has risen 0.9 per cent on 2010 Quarter 3 statistics.

And when this £126 million scheme is combined with the £180 million EMA replacement scheme it totals over £300 million which is close to what it would of cost to keep the £30 payment scheme for the poorest teenagers.

In a very rough estimate, it would cost around £380 million to continue the £30 payments; so the difference between the two policies is, at most, £80 million. That’s a price Gove is willing to pay when it buys him a Royal Yacht, but not when it helps the poorest teenagers stay in education.

The steep rise in the youth unemployment rate is what has helped encourage this government initiative.

The below chart shows the spike that has occurred in the youth unemployment rate for those aged under 17 since EMA was scrapped last September: 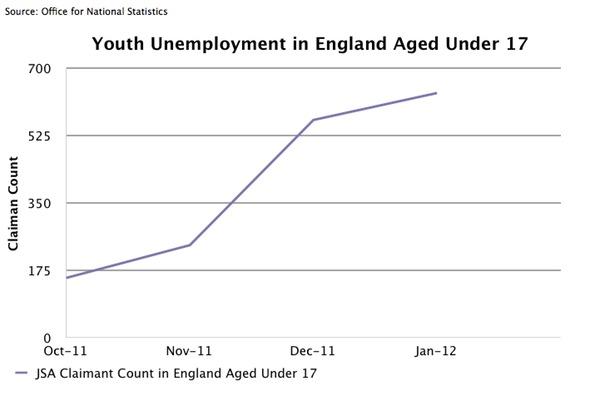 • January’s unemployment figures show that since October 2011 Under 17 year-olds unemployment is up by two thirds – which is a six per cent in the rise in the increase in the same time period last year;

The graph below shows the percentage change each month since October: 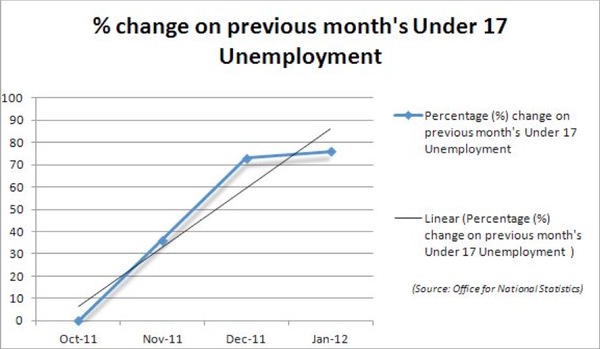 The government is right that youth unemployment is a ticking time bomb, something we at Save EMA have said all along, but sadly this government is cutting the wrong wire. This new scheme is a shoddy patchwork version of the EMA that risks costs the tax payer more and does less.

The Treasury says there will be only 600,000 jobs for unskilled, unqualified workers in our economy by 2020; and if this new scheme creates a generation of unqualified teenagers embedded in low skill insecure work in their mid twenties, it will be the tax payer who has to pick up the bill to correct this spill-over in the labour market.

The education maintenance allowance was a tried and tested government scheme. It was recognised by a plethora of organisations, like the independent IFS, who argued that EMA help to get those classed as NEET into the work place. This is how the IFS described EMA:

The EMA significantly increased participation rates in post-16 education among young adults who were eligible to receive it.

The simple cost-benefit analysis mentioned above suggests that even taking into account the level of deadweight that was found, the costs of EMA are completely offset.”

In stark contrast this new youth unemployment scheme is a shot in the dark, and if anything, it is a smoke and mirrors attempt at trying to correct the mistake of scrapping EMA. At a bare minimum it is like closing the door after the horse has bolted.

Teenagers need qualifications to enter long term well paid work, this scheme of mop and bucket incentives will not do that. If they are lucky they will get short term low paid work. Nevertheless, the most important thing to teach young people entering the labour market should be that you get a fair days pay for a fair days work. And not no days pay for an enforced days work.

For the almost the same amount of money they could have continued the payments of £30 a week like they have done in Scotland and Wales. But scrapping EMA was about the best politics and not the best policy.

22 Responses to “Teenagers need EMA, not JSA, to get back into the workplace”