Besieged residents of the Syrian city of Homs are crying out for Western intervention to save them from being slaughtered at the hands of Bashar al-Assad. 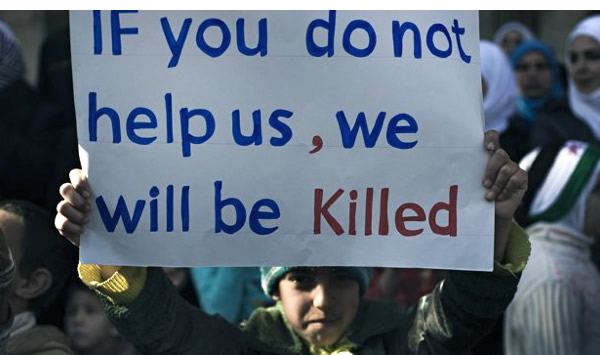 Besieged residents of the Syrian city of Homs are crying out for Western intervention to save them from being slaughtered at the hands of Bashar al-Assad.

There are calls for “unilateral American and British intervention” after the shameful Russian and Chinese vetoes at the UN, and further pleas for a no-fly zone, which could result in up to “70 per cent” of the Syrian Army defecting.

Death stalks Homs, which is under its fiercest attack of the 11-month uprising; the BBC’s Paul Wood says there is now “nowhere to hide” for the city’s people.

Alaa al-Sheikh, spokesman for the Khaled Bin Waleed brigade of Syrian rebels, told The Henry Jackson Society’s Michael Weiss that 42 people had been killed in the city of Rastan alone, describing how:

“There are bodies that could not be documented because they were completely mutilated and disfigured.”

“As an activist and a coordinator for the Khaled Bin Waleed brigade, I state that we in Homs, Idlib and Damascus suburbs call for unilateral American and British intervention. We also want to improve our relations with the US administration and people after the revolution, but we need you to save us.

“We are getting slaughtered, save us.”

As Weiss explains in the Telegraph, what is now needed “is not condemnations, demarches and shuttered embassies but a Western equivalent of intervention in Syria”, in the form of:

• Humanitarian “safe areas” to provide food, aid and medical supplies to the civilian population and give the various opposition groups a headquarters inside their own country;

• Advanced weapons and communication devices for the Syrian rebels;

• A no-fly zone to stop the regime from using its aircraft to conduct reconnaissance, offload security personnel and – yes – strafe rebel strongholds from the sky.

Also pleading for action is Danny Abdul Dayem, in the Baba Amr district of Homs, who told the BBC:

“I’ve been up from five o’clock am from the rockets, they started hitting us with rocket launchers from five am, more than 300 rockets have landed in just this area I’m sitting in in Baba Amr. I went to the field hospital at seven am, more than 25 pieces of bodies, children, women, men, dead people, either by shelling in their houses – the rockets either killed them in their houses – or the sniper even shot them.

“There’s bodies. Until now, the bombardment hasn’t stopped by rockets, this is the first time they have hit us with rockets. They used to bombard us with, for six months, they have been bombarding us with tank shells and mortar bombs, but today they started with rockets, rocket launchers, this is after what the UN did two days ago, what the UN cited, the UN gave our regime the green light to kill, the UN gave the Assad regime to kill more, they gave him the ok, they told him that no one’s gonna, gonna do anything about it, no one’s gonna help the Syrian people.

“You should see all the injured people on the floor, we have no place to put them, some of them are dying from a stupid injury like a bullet in the leg, or a bullet in the hand, cos we have no time to rescue them, we don’t have enough doctors, we can’t even stitch up their wounds, there’s so many injuries, there’s more than 20 bodies unknown, we don’t know who they are cos their faces are blown up, the pieces of bodies, you should see the bodies we have here on the ground, you can’t move them.

“Baba Amr, this area in Homs, is surrounded by snipers and barricades, army barricades, they’re not letting anyone out or anyone in, they’re not letting any medication in, any doctors in, any help in, they shot at some civilian guards they were trying to get medication in, and they also shot at two ambulance, Red Crescent ambulance, they wouldn’t let them in…

“They [the Free Syria Army] can’t do anything about this, this is bombarding from 15 kilometres away, how are they gonna stop rockets from landing on civilian houses, they cannot attack, as we explained a long time ago, the Free Syrian Army here, are here to defend only, they can defend, they can defend us from the army coming in, but they can’t defend us from bombardment, even they can’t do anything now, all they have is some Kalashnikovs and some RPGs and just now I saw what President Obama said on TV, that they wanna do, they wanna solve this problem without any military, without any military problems between them and Syria.

“Let me just say something: this Syrian regime will not go down, they will not leave without force, without military hits, we need no fly zone, which we don’t have; if we had no fly zone 70 per cent of our Syrian Army will defect with their heavy artillery and their tanks but they can’t because they will be hit by planes, until now we’re being bombarded.

“What the Free Syrian Army tried to explain to me about the plan was, is that the Syrian Army are going to bombard us for five days, they’re gonna pile us, they’re not gonna let no medication in or food in for five whole days, then the Army’s gonna try and get in, that’s their plan.”

“Syrian state television denied that there had been any bombardment. It said residents were setting fire to piles of rubbish on the roofs of their homes to trick the world into thinking that there was an attack.

“There is no doubt, however, from what we have seen and heard, that hundreds of shells and mortars have been fired at this place during the day. As I write this, the windows of the house we are in are still reverberating from the impact of a shell, probably in the next street.

“It is true that people have been setting fire to rubbish in the streets. They believe it will confuse the guidance systems of rockets apparently being fired at them. They are probably mistaken.

“People in this part of Homs say these attacks are the worst they have known since the beginning of the uprising, almost a year ago. The bombing has been going on for several days now.”

As we have long said on Left Foot Forward, something, something, must be done; how many more must die before our eyes?

33 Responses to “Amidst the burning flesh of Homs, Syrians plead: “We are getting slaughtered, save us””