Clegg praised the Labour's Lords health team for helping to ensure the NHS bill did not lead to privatisation. They insist the service is still under threat. 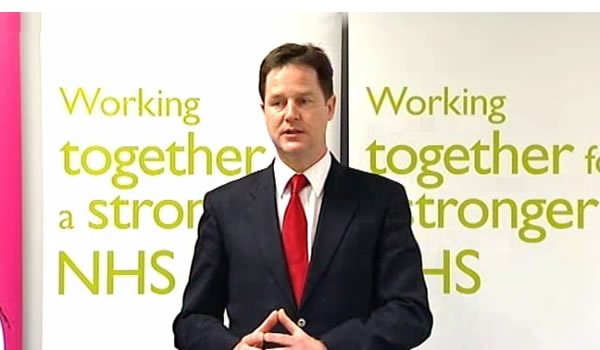 Nick Clegg’s and Baroness Shirley Williams’ open letter today to Lib Dem MPs and peers, ahead of the final votes on the NHS bill, praised Labour’s health team in the Lords for helping to ensure the bill did not lead to the privatisation of the NHS – but Labour peers insist the deputy prime minister is being too kind – that the bill still represents a full marketisation of the NHS.

An edited version of the Labour health team’s internal analysis is below:

Nick Clegg has written to Lords and MPs claiming that Liberal Democrat Lords have tabled amendments:

“…to make sure that the NHS can never be treated like the gas, electricity, or water industry.”

“However, given how precious the NHS is, we want to rule out beyond doubt any threat of a US-style market in the NHS.

“That is why we want to see changes made to this Bill that have been put forward by our Liberal Democrat team in the House of Lords to make sure that the NHS can never be treated like the gas, electricity, or water industry.”

But despite what Nick Clegg and Baroness Williams say today, none of their amendments change the fundamental heart of this Bill which will see the NHS turned into a full-scale market.

They may go on in the letter to say:

“We propose removing the reviews by the Competition Commission from the Bill to make sure that the NHS is never treated like a private industry.”

And point to Liberal Democrat amendments 186 to 188 that would delete clauses 77 to 78, allowing the Competition Commission to conduct:

“…reviews of how well the market for NHS services is functioning.”

However, these amendments do not prevent Part Three of the Bill establishing Monitor as an economic regulator with powers to enforce competition in the NHS. Monitor will still have concurrent powers with the Office of Fair Trading and the Competition Commission.

Clegg and Williams go on to reassure in the letter that:

“We want to keep the independent regulator of Foundation Trusts, Monitor, to make sure hospitals always serve NHS patients first and foremost.”

But this is a minor amendment and makes no fundamental change to Part Three of the Bill. It does nothing to prevent the NHS from turning into a commercial market modelled on the privatisation of the utilities in the 1980s, or from Monitor taking on its role as an economic regulator.

Clegg also brushes away fears of American-type healthcare reaching the UK by arguing:

“We will introduce measures to protect the NHS from any threat of takeover from US -style healthcare providers by insulating the NHS from the full force of competition law.”

However Williams has actually backed down on this issue. Just two weeks ago, she was calling on the government to drop part three of the bill which turn the NHS into a full-scale market.

“What that would mean for the bill would be dropping the chapter on competition, and retaining Monitor as the regulator of prices and of the foundation trusts. It would also mean pressing ahead with decentralisation, and the involvement of the public and the local authorities through the new health and wellbeing boards.

“The changes already made include some valuable reforms. Some of them have been significant, for instance the reinstatement of the health secretary’s responsibility for a comprehensive health service free at the point of need.”

Now, she has stopped arguing for part three to be dropped, and is instead backing Nick Clegg and a health and social care bill that will change the NHS into a full scale market.

The deputy prime minister also claims to have averted the potential for the NHS putting profit ahead of patients, arguing:

“Finally, we will put in place additional safeguards to the private income cap to make sure that Foundation Trusts cannot focus on private profits before patients.

“These changes are needed, not just because of this Bill, but also to plug the holes left by Labour’s 2006 Health Act that allowed private providers to make profits at the NHS’ and taxpayers’ expense.”

Their most recent opportunity to oppose this was on January 16th 2012 when Labour held a debate on the role of the private sector which called on the Government to rethink its plans to allow the NHS to devote up to 49% of its resources to private patients. The Liberal Democrats failed to do this, with 47 of them voting against Labour’s motion.

Clegg wants to sell his party a dummy – that the NHS has been saved and it was the yellow wing of the coalition that did it and they can declare victory.

In fact, it’s just posturing for the grassroots. We can only hope – for their pride and the NHS’s sake – they don’t swallow it.

• Jones pledges to listen to NHS staff as Cameron leaves them out in the cold – Ed Jacobs, February 20th 2012