Jack Storry reports from the speech by Axelle Lemaire building support for François Hollande in London on Tuesday night. 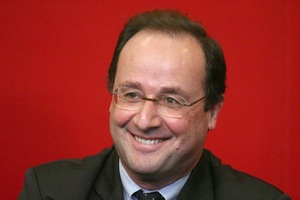 Jack Storry is the International Officer of the Young Fabians

“In 75 days France will elect a new President.”

That is how Axelle Lemaire, Parti Socialiste candidate for the Northern Europe constituency in the coming French legislative elections, began her speech at Tuesday’s event in Parliament hosted by the Young Fabians and Labour Movement for Europe. It was a stark reminder of just how close the second most populous country in Europe is to electing its next President.

Lemaire described it as her deepest wish that Parti Socialiste candidate François Hollande is elected as the next president of France, and when asked whether she thought he would be, answered with a clear “Yes”. She cited three factors for her confidence – Hollande’s strong position, Sarkozy’s weaknesses and the context of the election.

Lemaire first highlighted the strong polling position of Hollande. Polling in recent days has shown Hollande extend his lead in the first round to 8 points and his margin in a head-to-head runoff with Sarkozy to 16 points (58 per cent – 42 per cent). This follows a trend over the last month which has shown consistent and growing leads for Hollande.

Lemaire then turned her focus to the poor record of President Nicolas Sarkozy. She said his record was 2.8 million people unemployed, a rising budget deficit, rising public debt and the loss of France’s AAA credit rating.

Lemaire also attacked Sarkozy on the lack of a legacy, saying:

It is clear that the French left have a finely tuned attack line on Sarkozy and intend to make his record a key issue of the campaign.

Finally, Lemaire stated she felt the context of the election was a strength for Hollande. The election is taking place at a time when the right in France is failing to respond to the economic crisis and people are can see left is a genuine alternative. Lemaire said there is a distinct feeling that this election is a now or never moment.

Whether Hollande is able to capture the Palais de l’Élysée on May 6th remains to be seen, but it is clear that the Parti Socialiste find themselves the best position in more than a decade to do so.

19 Responses to “Is François Hollande the next president of France?”