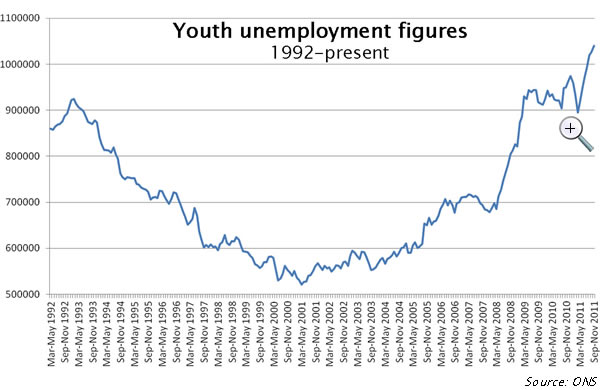 We have to address the problem of an entire generation being consigned to economic inactivity. Hundreds of thousands of the young people on that dole queue are hard-working students who were encouraged throughout their time at school to ‘aim higher’ and aspire to university.

They did that but now they find the door being slammed in their face through a combination of places being axed, fees rocketing and financial support being cut. These young people do not deserve to become simply another statistic in the record unemployment figures. They need to be given the chance to fulfil their potential, whether that’s at college, university or in the workplace.

A positive first step must be to improve access to education, and the imminent university grant letter from the Higher Education Funding Council for England (HEFCE), which details how much funding will be available for university teaching budgets, needs to provide an urgent boost to our beleaguered higher education sector. In reality this means the government rowing back on plans to slash state funding for universities.

Ministers need to recognise that higher education is a public good that generates billions for our economy and that investing in it will benefit all of society and potentially prevent hundreds of thousands of young people from a lifetime of signing on. The government needs to make a clear statement that it backs our universities and young people and the best place to the start is with HEFCE’s grant letter when it is finally delivered in the next few days.

• How well does Boris do on apprenticeships? – Darren Johnson AM, January 9th 2012