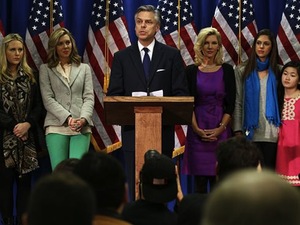 Centrist Republican presidential candidate John Huntsman has announced he is dropping out of the race for the GOP nomination today.

Speaking in front of his family earlier today, Huntsman said:

“This race has degenerated into an onslaught of negative and personal attacks not worthy of the American people and not worthy of this critical time in our nation’s history.”

“I call on each campaign to cease attacking each other and instead talk directly to the American people about how our conservative ideas will create jobs, reduce our nation’s debt, stabilize energy prices and provide a brighter future for our children and our grandchildren.

“Three years ago the president promised to unite the American people yet his desire to engage in class warfare for political gain has left us more divided than ever.

“I believe it is now time for our party to unite around the candidate best equipped to defeat Barack Obama. Despite our differences and the space between us on some of the issues, I believe that candidate is Governor Mitt Romney.”

As Wonkette points out, this endorsement is relatively unsurprising:

Ha, wow, who could’ve foreseen that?

There are three differences between Huntsman and Romney, all relatively minor: Huntsman speaks Chinese while Romney speaks French, Huntsman is super rich while Romney is one of the world’s richest men, and Huntsman hasn’t spent the past thirty years running for president the way Romney has.

It is this latter point, pundits say, that draws the clearest contrast between the two unloved moderate Mormon millionaires.

Huntsman leaves the race at a time when the polling shows a clear lead for Romney over all of the other candidates individually, but a close race when the field at large is considered. According to TPM’s poll of the polls, Romney is at 37.2 per cent support – 6.2 per cent less than the total support of Gingrich (15.5), Paul (14.1) and Santorum (13.8).

If those candidates continue to fight between each other as well as with Romney, he will walk the nomination. The concern for him is that if the supporters begin to align behind any individual candidate – and there is a concerted, if inept, effort to make that happen – he may have a fight on his hands.

9 Responses to “US 2012: Huntsman cedes the centre to Romney”