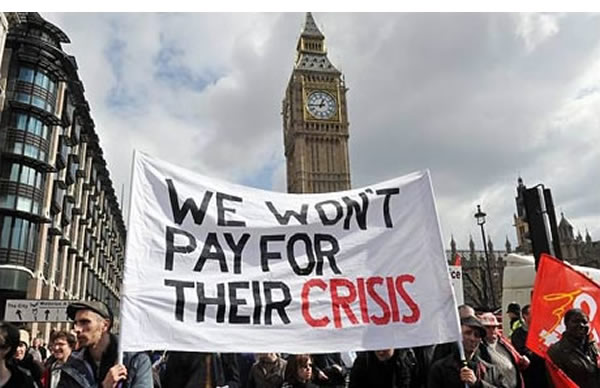 The unprecedented scale of the government’s deficit reduction programme was always going to generated social protest. In this article I will also identify the features of some of 2011’s most effective political campaigns against the austerity programme and what they say about the wider state of our politics. The new wave of social activism will generate both challenges and opportunities for the labour movement.

Traditionally people with the lowest incomes have lacked a political voice equivalent to the stake they have in policies designed to redistribute wealth and to provide them with services like housing that they could not secure from their own resources.

Many would argue that people on low incomes are bearing the brunt of the government’s austerity programme. So have those with most at stake been at the forefront of popular protest against the government’s policies?

The student protestors dominated protest at the early stage of the spending cuts and conform to the established pattern of those with the greatest levels of social capital and educational levels being the most assertive in representing their views.

Conversely, the initial overspill of protest from the student movement to the arguably more important issue of the scrapping of the education maintenance allowance (EMA) was not sustained. The demographic of EMA beneficiaries was notably poorer and more drawn from ethnic minorities that the student protestors.

The one social group adversely affected by the welfare cuts who took part in popular protests in some numbers were disabled people. However as in many past occasions significant numbers of disabled people are part of national networks of large charities, like Scope and Radar.

Many of these charities have invested considerable resources in mobilising disabled people and supporting their political advocacy. However individuals affected by the housing benefit reforms and the household cap on benefits have lacked any national visibility.

By contrast, the National Trust-led campaign against the government’s forestry proposals was powered by thousands of affluent voters writing protest letters.

The fact that policies like the housing benefit reforms have not led to direct mobilisation of the communities directly affected by them is aggravated by the fact that these groups are far less likely to turnout in general elections.

Barack Obama’s community activism in Chicago was based on the belief that policymakers would become more responsive to poor peoples issues if those voters were brought into the political process. Obama’s own election as a United States senator was an ‘aftershock’ of long term political and electoral re-engagement of poor communities.

The protests that have been most effective are those that have focused on wider systemic political and economic issues rather than defensive campaigns reacting to specific cuts.

UKUncut and the Occupy campaigns effectiveness can be seen in the way they featured high up news schedules; how they sustained their media impact and that they shifted the terms of debate. UKUncut’s campaign challenged the central tenet of the government’s argument that there is no alternative to its spending cuts.

Both campaigns demonstrate the ability of online campaigning to reach out to large numbers of unaffiliated people around a clear focus and to do so in short time frames. Prior to the cuts, grassroots campaigns like Plane Stupid, have used the agility that comes with not having large formalised decision making structures to sometimes steal a march on large campaigning charities.

In the 1990s Adam Lent and I argued that national protest movements formed in areas like gay rights and foreign policy in part as a result of political disaffection with the conservatism and caution of the Labour Party leadership.

The Occupy campaign’s challenge to the City of London about its past and ongoing role in the financial crisis has taken place at a time when Labour is undergoing an agonising reassessment of its record in office, including its policies towards the banking sector. Occupy’s stance on the City of London was clear and urgent and quickly generated quite significant levels public approval.

As a result, Ed Miliband and Vince Cable found themselves acknowledging the force of Occupy’s core political case. Occupy’s experience shows that social movements can expand the political space for progressive politics.

However, the vibrant new social movements pose a challenge for Labour.

The youthful face and energy of groups like UKUncut serve as a sharp contrast to the ageing profile and falling membership of the trade unions and Labour Party. The more social movements are seen to set the agenda on fundamental questions about the economic and political system, the less relevant Labour may seem.

However social movements, by going where mainstream political leaders initially fear to tread, can prepare the ground for stronger progressive commitments.

Occupy Wall Street’s messaging, ‘we are the 99 per cent’, provided a countervailing force to the reactionary Tea Party by channelling popular discontent over the banking bailouts through progressive politics. Within weeks President Obama realigned his political message to argue for a greater contribution from wealthy Americans to pay down the deficit.

Labour needs bold and vibrant social movements not only to help prepare its path to power but also to govern effectively.

This year will see new potential policy conflicts that could rally protest and there will be a further test of whether those who are most socially marginalised absorb more pain without protest.

2012 is likely to see renewed pressure from within the Conservatives part of the coalition to abandon or water down climate change commitments, particularly as growth continues to stagnate. This year will see a new wave of benefit cuts come into force just at a time when unemployment is rising.

Will the newly established internet-driven loose and informal campaign groups become more structured mass movements with memberships that systematically take part in ongoing actions, or are the days of the mass mobilisation of groups like the Campaign for Nuclear Disarmament now a thing of the past?

• A consensus on community organisation – Will Straw, March 31st 2010

29 Responses to “The new politics of protest”