Welfare reform and the coalition’s cuts to disability benefits were one of the leading policy issues in the first week back, with growing opposition. 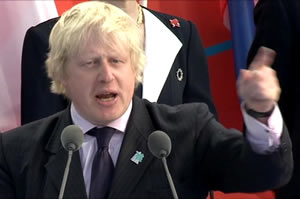 • Welfare reform and the coalition’s cuts to disability benefits were one of the leading policy issues in the first week back, with growing opposition to the changes.

He adds that the DLA changes:

“…could potentially condemn the parents of disabled children and young people, and the children themselves to a life of financial hardship rather than financial assistance…

“The three-month benefit qualification period [for Disability Living Allowance] should be retained, rather than extending this to six months as proposed…

“[I am] concerned about the government suggestion to remove automatic entitlement [to Disability Living Allowance] for certain groups. Claims should be based on the needs and circumstances of the individual applying.”

Boris also questions the motives behind the reforms:

Also on this policy area this week, shadow work and pensions secretary Liam Byrne, briefing the Mail and writing in the Guardian, sought to recalibrate Labour’s position on social security – though sadly not with the use of evidence and fact but by rehashing the tired onld tabloid clichés and lazy assumptions that even Boris, as we see above, has railed against.

“The saloon-bar wisdom of statements like ‘decent Labour voters see their neighbours lie about all day and get benefits while they are working their socks off” needs to be confronted with the evidence the UK public grossly overestimates abuse of the benefit system and grossly underestimates the scale of disability in benefit caseloads.

“One statistic serves to illustrate the point: there are a quarter of a million phone calls to DWP’s benefit fraud hotline annually. One per cent of these calls result in a sanction for benefit fraud. Put another way, 99% don’t. That means an awful lot of legitimate claimants are getting hauled over the coals every year because of snap judgments by ill-informed neighbours and acquaintances.

“Now ask yourself: do we want opposition policy to be based on the perceptions of voters or on the evidence?

“Would-be political tacticians will have no hesitation in opting for the former, but Labour will have to live with its chosen policy for the long-term. Policy based on ill-informed “grievances will do nothing to address the real issues about social security, and, as evidence (pdf) from the United States suggests, may be doomed to political failure as well.”

“The opposition should be trying to change the terms of debate, not passively reproducing them.

“That wouldn’t generate friendly coverage in the Daily Mail – but as the blogger Mason Dixon, Autistic put it: ‘Short-term headlines are not worth the lasting brilliance of a solid paradigm change in a national debate.’”

“We live in a world where a Labour leader, supposedly from the soft left, seems to think that beating up on benefits claimants offers the road to victory, and a Conservative mayor of London is the biggest elected defender of the disabled. Strange times indeed.”

• The biggest news story this week was the conviction and jailing, after 18 years, of two men for the racist murder of Stephen Lawrence.

Whether they will ever face trial is anyone’s guess, though the Met Police Commissioner, Bernard Hogan-Howe, has vowed to bring them to justice:

“The other people involved in the murder of Stephen Lawrence should not rest easily in their beds. We are still investigating this case.”

Of the remaining suspects, the Standard’s Martin Bentham and Paul Cheston explain:

“Police say there are seven other suspects on a list they narrowed down from 187. Witnesses say there were up to six in the gang attack, including a “blond haired boy” who has never been traced.

“Three of the prime suspects are Neil and Jamie Acourt and Luke Knight, but other names emerged in the trial and appeared in the Macpherson report…

“Detectives say no new evidence has emerged in the trial which could lead to charges. Their hopes rest largely on the remote prospect of a suspect, possibly Gary Dobson, or a girlfriend turning informant or a new DNA technique discovering fresh forensic evidence.”

Let us hope so.

On Left Foot Forward this week, we looked at the legacy of Stephen Lawrence, in particular the work of the Stephen Lawrence Charitable Trust, set up by his parents, which, since 2000, has helped many young people realise their ambitions to become architects by supporting them with bursaries and mentoring support.

“What their heart was, was to say is it possible that something good can come from something just immeasurably bad, and so the idea was to see if it was possible, if it were true in fact that life could spring from death.

“And so, of course, Stephen passed away and his desire was to be an architect, and so while that was taken from him, what the Lawrence family has been able to do is to give it to other “Stephens” as we call them.”

Though racist murders still occur, the tragic shooting of Indian student Anuj Bidve in Salford over Christmas the latest example of hate flushing out a promising young life and destroying a family, Britain now is a better place, we are a less-racist country: that is Stephen’s legacy.

• Over the past few days on Left Foot Forward we’ve looked ahead to the major issues in 2012, at home and abroad.

And here’s a reminder of our look back at 2011, including the progressive and regressive of the year.

Observer journalist Nick Cohen, who made the case for intervention in Syria on New Year’s Day, revealing the latest horrors the regime of President Bashar al-Assad was perpetrating on the Syrian people.

“Something must be done – time is running out and people are being slaughtered… The case for responsibilities beyond our own borders needs to be made once more. It worked in Libya, we should all like to see it work in Syria.”

People buried alive in shipping containers, tortured, burned to the bone on hot metal plates, doctors and patients tortured and murdered in hospitals… As we said on Monday, it’s time to act; the Syrians deserve freedom, democracy and liberty every bit as much as we do.

From good journalism to bad: the first regressive of the week this year is Telegraph columnist Peter Oborne, normally one of the more thoughtful and rational right-wing commentators, whose excellent tribute to the legendary cricketing great Basil D’Oliveira in November was one of the best articles of 2011.

Yesterday, however, his Telegraph article, in which he claimed “in every area of public life, the Left is losing the argument”, “the facts of life are Conservative”, and “David Cameron’s coalition is shaping up to be one of the most significant governments in modern history”, was error-strewn, in factual basis and analysis.

“The piece has a triumphalist tone, but it starts on an untruth and doesn’t get much better from there…

“The graph shows the Conservative Party had never, in the post-war era, had a majority of voters… The Conservative vote plotted against the combined Labour and Liberal/SDP-Liberal Alliance/Liberal Democrat vote in every election since 1945.

“For 2010, the share is 52 per cent Lab-Lib, 36.1 per cent Conservative. Not quite an abject rejection of the liberal Left, as Oborne makes out…

“What the Conservative strength on policy demonstrates isn’t that David Cameron is a re-aligning prime minister in the vein of Thatcher and Atlee, but that in one very specific way, he has changed the political scene: the liberal Left which Oborne blames for the ills of Britain has been sundered in two.

“With the liberal part of the liberal Left in government, it would seem as though policy should be moving slower in the Conservatives’ direction than in a Conservative majority government. Yet that doesn’t seem to be the case.

“Oborne is a fearsome polemicist, but when it comes to using stats, he should be more careful. Acting like the liberal Left is an unpopular elite is not borne out by the facts, and seems to be about as backwards as one can get.”

The University and College Union’s report on university funding, which revealed government funding of university teaching and research is to fall to its lowest level for more than 100 years.

“As Graph 1 shows, the research, which comes as ministers prepare to announce the 2012 higher education grant letter, forecasts that by 2014/15 annual government funding for teaching and research will make up just 15.0% of universities’ income – the lowest since the 1900s.

“This government’s regressive university reforms will accelerate this process further and see annual public investment in teaching and research shrink to levels not seen since the 1900s.

“These plans will put at risk decades of progress in opening up access to education and will endanger the health of the sector. You cannot maintain a world-class university system in the 21st century by turning the clock back to the 1900s and before.

“Our universities are a public good that currently generate billions for the economy – why put that at risk by starving institutions of public funds and forcing students to foot the bill?”

This weekend on Left Foot Forward:

• Alex Hern looks ahead to what 2012 holds in store for young people.

• The Week Outside Westminster – sign up to receive it by email here.

• Alex Hern looks ahead the challenges facing students in 2012.

• The Week Outside Westminster – sign up to receive it by email here.

5. Rip-off Britain: Our train fares are triple those on the continent – Sophie Allain, Campaign for Better Transport