Alex Hern highlights an appalling testimonial by an unemployed man speaking to Radio 5 yesterday. It is a must-listen. 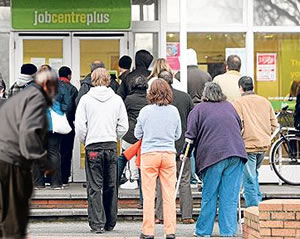 The narrative of deserving versus undeserving poor is one which plays into the heart of the governments strategy with must of its contentious legislation. Every at-risk group is forced to defend their turf by deflecting attention onto others, in what is a very real example of that contentious phrase, ‘divide and rule’.

Radio Five had a heartbreaking call from a listener yesterday, who described his shame at having to move back in to his parents house at 46, and the disgust with which he is treated just going about his daily life.

I’m up to my back teeth with people saying that the unemployed have a cushy number… You’re treated with rudeness, you’re treated as though you don’t exist… I’d have more respect if I was in prison, a mass murderer. You’re looked down upon when you sign on.

I apply for several jobs each week, I’m doing my bit… I apply for all kinds of jobs… but they don’t want to hear.

Darryl’s full message can be heard here. It makes for sobering listening.

• Jobseeker’s Allowance is worth less and harder to claim than ever before – Nicola Smith, December 21st 2009