The UK's student visa system is turning prospective entrepreneurs away from the UK, according to a leading Indian newspaper, reports Will Straw from India. 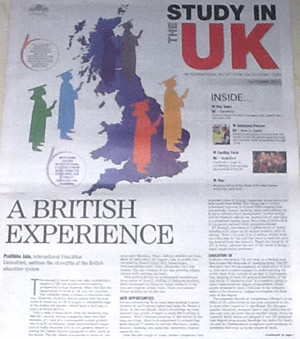 The UK’s student visa system is turning prospective entrepreneurs away from the UK, according to a leading Indian newspaper; Will Straw reports from India

The revelation shows that despite surviving a week of political scrutiny, Theresa May’s policy is storing up long term trouble for Britain. An eight-page supplement distributed with Thursday’s Economic Times of India focused on the UK’s Higher Education system.

“The change in work-visa rule after completing a degree in the UK has caused concern among prospective Indian students. Many feel that the opportunity to work in the UK was the incentive that attracted them to invest in education overseas.

“However, students should realise that the true value of studying in UK is to gain a competitive edge in the Indian job market, which faces a skill gap in many growing sectors.”

The perspective should be troubling for a country where businesses cite the Government’s increasingly strict immigration policy as a drag on growth.

Given UK universities are second only to the United States on quality it is an increasing concern that individuals taught in the UK are being prevented from realising their potential or setting up their own businesses on British soil.

As Sally Hunt, General Secretary of the University and College Union (UCU), wrote on Left Foot Forward in September:

“The changes to student visas as part of the government’s clampdown on immigration risks making the UK a less popular destination for foreign students, which, based on today’s figures, would be bad news for UK universities as they struggled to adjust to huge government funding cuts.

“It is not just universities and our thriving educational export sector that would suffer though. In June, the home affairs select committee warned government plans to limit visas could result in a £3.6 billion loss from the British economy.

“The government might think soundbites around immigration play well to a domestic audience, but they risk doing real harm to our universities and our reputation on the world stage. UK universities are enriched by the students and academics that come to this country to study, carry out research and share their knowledge.

“Politicians must be very careful not to restrict academic access or make ill-judged comments that give the impression UK universities are closed for business.”

Despite all the evidence, the government appears resolute in its attempt to reduce immigration regardless of whether it enhances the UK’s productivity or not.

The home secretary has survived the Brodie Clark scandal but the damage her policy is causing the UK is yet to be fully understood.

• Give the international student market the credit it deserves – Ranjit Sidhu, October 1st 2010