Ed Jacobs covers the SNPs calls for Osborne to move away from strict austerity, both for Scotland and nationwide. 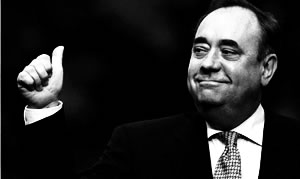 Ahead of the chancellor’s autumn statement a week on Tuesday, dubbed by ministers in Whitehall has being akin to a programme for growth, Scottish finance secretary John Swinney has sought to pile the pressure on George Osborne with a demand that he “change course” and pump much greater levels of investment into capital infrastructure projects.

Writing for Scotland on Sunday, in an article in which he sought to highlight all that the SNP was doing to protect jobs and encourage growth, the finance secretary concluded:

“I have proposed a number of constructive measures to the Chancellor that can be implemented immediately to boost the economy.

“The UK government must set out a targeted, cost-effective programme of new capital investment to achieve lasting economic and environmental benefits.

“Action must also be taken to help leverage in additional private funding. In particular, more could be done to help pension funds and other large institutional investors channel a proportion of their investment into major infrastructure projects.”

Using an interview with the BBC Politics Show for Scotland, the minister called specifically for the chancellor to announce that the UK government would borrow an additional £20 billion to kick start growth, £2 billion of which should then be provided to Scotland.

Among the other package of measures Swinney called for included:

• Supporting calls for the rate of VAT on repair and maintenance work on houses to be cut to five per cent to support investment in new housing and boost the construction industry;

• Greater efforts to cut the cost of fuel for households in Scotland, with a call for a fuel duty regulator and discounts on duty for more remote areas;

The finance secretary’s “wish list” comes amidst an on-going spat with the UK government over the impact that the SNP’s proposals for an independence referendum is having on prospects for economic growth and investment in Scotland.

Having earlier this week accused the chancellor of doing down the Scottish economy following George Osborne’s warning that a lack of clarity over independence is having a serious impact on the prospects for investment north of the border, the SNP have come under attack from both Lib Dems and Labour over the impact that independence would have on its defence industry.

Last week Lib Dem Scottish secretary, Michael Moore, warned that the uncertainty over Scotland’s constitutional future would have a damaging effect on the defence industry, and now he has found an ally in the form of the Scottish Labour peer and former NATO secretary general, Lord Robertson, who has argued:

“No wonder defence companies watch nervously as the debate over whether Scotland will remain part of the UK or becomes a separate country drifts on as the Scottish government refuses to give clarity on the timing and nature of a separation referendum.”

Yet in the face of such criticism, there is no sign of any further clarity, as SNP MSPs now find themselves feeding off and being strengthened by the sustained attacks on them from the Westminster government. In her recent article for example for Scotsman, one of the party’s MSP’s, Joan McAlpine has definitely declared:

“Osborne’s latest intervention is a piece of political cynicism, which looks increasingly like part of a co-ordinated campaign to damage confidence in Scotland both internally and externally.

“Last month the Financial Times reported that our success in attracting international investment was down to ‘the team Scotland approach adopted by the devolved Holyrood government and its enterprise agencies.’

“But the FT also reported that this success had roused a green-eyed monster among true blues in the North of England. Linda Arkley, North Tyneside’s Tory mayor, was so upset at losing 900 Amazon jobs to Greenock and Fife that she intervened through both Osborne and Vince Cable to ‘see what could be done.’

“For from having Scotland’s future prosperity at heart, it is more likely that the Chancellor is desperate to dampen down our success.”

For those parties in favour of Scotland remaining within the union, it is time to ‘get positive’. Hurling insults at Alex Salmond and the SNP simply will not be sufficient to win a referendum. Attacks by coalition ministers in particular have served only to strengthen the SNP, seen as the force best placed to fight off Westminster’s slash and burn economic strategy, inflicting such pain on Scottish families.

As Douglas Alexander has concluded this weekend of his own paty:

“Scottish Labour, in the years ahead, must be pro-Scottish and not simply anti-SNP. If the Scottish people believe that we hate the SNP more than we love Scotland we will continue to lose.”