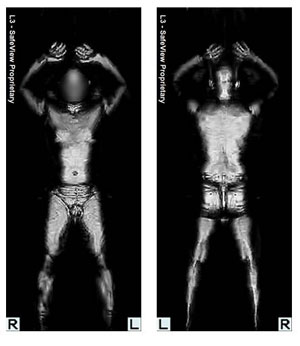 Transport secretary Justine Greening set the government on yet another collision course with the European Union and civil liberties groups today.

She has announced that passengers departing from Heathrow, Gatwick and Manchester airports will not be allowed to opt out from going through the controversial new full body scanners, which penetrate clothes.

“Most responses to the consultation expressed discomfort with the idea of having an image of their body captured for analysis, and they indicated that – if selected for a security scan – they would prefer to opt for an alternative method of screening.

“I have considered this carefully. However, I have decided against it, on security, operational and privacy grounds. I do not believe that a ‘pat down’ search is equivalent in security terms to a security scan.

“A full private search – involving the loosening and/or removal of clothing in the presence of security staff in a private room – would deliver a reasonable level of assurance.

“However, I believe that this is likely to represent a greater intrusion of privacy than a security scan, and that nearly all passengers, if they fully understand the procedures, would be unlikely to opt for this alternative.

This puts her in contrast with new EU on the use of the scanners released last Monday, which said:

Security scanners shall not store, retain, copy, print or retrieve images; any unauthorised access and use of the image is prohibited and shall be prevented; the human reviewer analysing the image shall be in a separate location and the image shall not be linked to the screened person and others.

Passengers must be informed about conditions under which the security scanner control takes place. In addition, passengers are given the right to opt out from a control with scanners and be subject to an alternative method of screening.

“I am aware that the proposals recently agreed by the European Parliament include the right for passengers to request an opt out from scanning. The UK did not support these proposals when they were presented to the aviation security committee.

“Given the security arguments against permitting such an opt-out, and the threat level that exists in the UK, the government intends to use its powers under the Aviation Security Act to maintain the current position. Those passengers selected for scanning will therefore not be able to fly if they are not willing to be scanned.”

So from now on, if you have the bad luck to be selected for enhanced scanning, you have no choice but to allow someone to see your naked form. Happy Holidays!

• As they have done before, Norwegians need to “keep the red hats flying there” – Fiona Twycross, July 23rd 2011