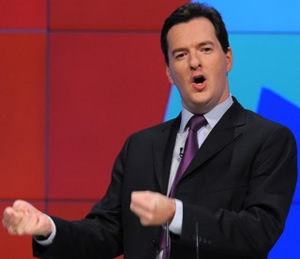 As the dust settles on an Autumn Statement that the BBC’s Political Editor Nick Robinson spent all day declaring to be the “statement that George Osborne never wanted to make”, across the devolved nations the measures announced by the chancellor have gone down like a lead balloon.

In declaring the package of measures announced by Osborne as “too little, too late”, Scottish finance secretary, the SNP’s John Swinney concluded that the chancellor had been forced to “swallow a bitter pill” in the face of the Office for Budget Responsibility pointing to his plan A for the economy having failed.

Outlining his regret that the measures announced did not go far enough, the cabinet secretary continued:

“The chancellor has proposed a limited increase in capital budgets, but the Treasury are so far unable to tell us by how much our revenue budget is going to fall. We need a complete picture to judge these announcements, and I am writing to the chancellor seeking this information urgently.

“The Scottish government has called for a targeted, expanded programme of some £2 billion for capital infrastructure investments in Scotland to stimulate demand – which has not been delivered.

“The OBR even states that the chancellor’s announcements will ‘have limited impact’ on their forecast for the economy. Now and into 2012 is the danger point in terms of the UK economy re-entering recession, yet over 70 per cent of the proposed action on capital spending is not due to happen until 2013-15.

“The chancellor has done nothing to create overall demand stimulus – total spending is the same and he is only borrowing to fund an increasing deficit, due to lower revenues and higher value of benefits.”

In piling the pressure on the UK government meanwhile, Labour’s shadow Scottish secretary, Margaret Curran, outlined how Scotland now found itself between a rock, the government, and a hard place, the SNP. She declared:

“This statement exposed the colossal failure of the Tories’ economic plan. The chancellor has admitted what families, pensioners and businesses across Scotland know – his plan is hurting, but it’s not working. The Tory plans mean unemployment rising, growth flatlining, and tens of billion more borrowing.

“Scotland is hardest hit because the SNP’s inaction on jobs and growth means youth unemployment is even higher in Scotland that the rest of the UK – topping 100,000 for the first time since records began.

“George Osborne’s strategy is completely in tatters. Plan A has simply failed, but the tragedy we face in Scotland is that the SNP’s plan isn’t working either.”

Rounding the day up north of the border meanwhile, BBC Scotland’s political editor, Brian Taylor, used his blog to outline why the £443m extra for Scotland in Barnett formula consequential might not be as rosy as it seems. He explains:

“Firstly, the new capital investment – a Barnett consequential of planned improvements in English roads, railways and schools – is spread over the period to 2015.

“Secondly, the Treasury has yet to spell out the details for revenue spending – which is likely to be cut in line with the chancellor’s forecasts today of continuing constraint.

Across Wales, whilst welcoming steps in the right direction towards investment in capital spending including work to improve the M4 motorway and the £216 million extra it will provide the Welsh government, first minister Carwyn Jones was clear that as in Scotland, the statement failed to go far enough, declaring:

“There is no escaping that the economy is close to returning to recession.

“The chancellor says his plan aims to bring down public debt, but his own figures show that borrowing and debt will be higher than previously forecast and will take longer to repay.  The books won’t be balanced before the next general election and austerity in public spending will continue until at least 2016 or 17.

“This paints a worrying picture of the outlook for Wales and the challenge we continue to face in delivering public services and protecting the economy. We have been pressing the UK government for more action to boost the economy and increase investment for the last 18 months but this response falls short of what is needed.”

In a similar argument, whilst welcoming what had been announced, Plaid Cymru’s leader in Westminster, Elfyn Llwyd, said of the new national infrastructure plan:

“This is only scratching the surface of the £1.5bn that we should be expecting to be spent in Wales through these schemes.  With our economy generally faring worse than that of England, we need to make our own luck and advantages, not hope for hand-outs from the chancellor.

“The money that we do have from this should go into capital investment and helping businesses in Wales to grow and create jobs – especially to help young people into work.”

In contrast however, Sammy Wilson, DUP finance minister at Stormont, stood somewhat isolated from his ministerial counterparts in Scotland and Wales. Welcoming the £134million of additional capital that will be available for Northern Ireland over the next three years, the minister declared:

“Whilst we wait to see the full outcome of the chancellor’s statement, at this stage it appears to be positive news for Northern Ireland. This is the sort of boost our economy needs to help it recovery during these difficult times.”

“This unexpected gain, while very welcome, should not blind anyone to the fact that times will continue to be lean for years to come here.”