Dan Ashley writes about the ongoing disaster that is the government's tuition fee policy; now, they are apparently surprised that applications have gone down. 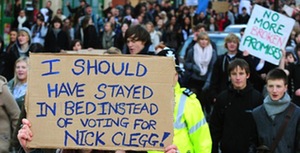 The fact that applications to university have slumped by nine per cent year on year is not a great shock to those of us involved in the higher education sector. It is difficult to know where to begin when highlighting the problems with the government’s university fees policies and their desperate attempts to portray them as anything other than regressive and damaging.

While the reforms have been a confused failure from the very start, it is only now that we are starting to see the damage they may cause.

When forcing the vote through the commons, and urging Liberal Democrat MPs to break the election pledge they made to vote against any increase in fees, ministers insisted that fees above £6,000 would be the exception.

Despite that guarantee, they budgeted for an average fee of £7,500 a year. Whoever was behind the maths got their sums wrong, as the average fee for 2012 came out at almost £8,400 a year.

However, last week, in a desperate attempt to drive down the cost, the university regulator, OFFA, announced that universities could reset their fee levels.

Although universities had already set their fee levels, around 30 have now indicated they wish to lower the cost. The reason is that after the average fee level came out much higher than the government had budgeted for, it said that institutions that charged fees below its miscalculated £7,500 a year can bid for extra students.

Universities are already struggling to keep up with the flip-flop nature of government policy, and those students who had applied will no doubt now want to check if there are cheaper options back on the market.

Got all that? It’s fair to say that the confusion caused by the botched reforms is causing young people to think twice about applying for university or only considering the cheaper options.

As well as a record slump in applications, a survey released today by the BBC warned that higher fees are putting one in ten A-level students off applying to university.

Around half of the youngsters polled said they would consider a university closer to home or one abroad with cheaper fees to save cash. People should study the right course for them, not just the cheapest one or none at all. These depressing figures take us back to the time when it was cost, not ability, that determined your future. Can we really afford to push potential Nobel Prize winners away from their specialism because of the cost of study?

The government’s fees policy has been a disaster from the start and it is clearly having a serious impact on the choices young people make. Now is the time for a rethink to avoid doing serious damage to universities and young people’s futures.

• Clegg’s using the same rhetoric to justify fees rise as he used to oppose it – Aaron Porter, February 4th 2011

27 Responses to “University applications down 9 per cent on 2011”