Richard Hebditch, of the Campaign for Better Transport, writes about the challenges facing Justine Greening as she starts work at the Department for Transport. 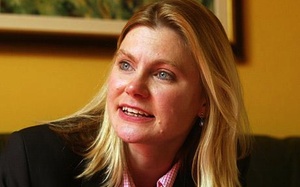 So it’s all change at the Department for Transport, with Philip Hammond having been replaced by Justine Greening. The new Secretary of State for Transport faces an early choice between updating our transport system and making it fit for the future or locking us further into dependency on oil.

Philip Hammond did some good things as Transport Secretary – scrapping the third runway at Heathrow and the A14 widening scheme, supporting rail investment including electrification, and keeping in place incentives for low carbon vehicles. It wasn’t all good though.

He oversaw unprecedented increases in rail fares, which have ensured we have some of the highest fares in the world, and promoted the increase in motorway speeds to 80 mph. He was also decidedly unenthusiastic about measures to give people real travel choices, such as travel plans and cycling.

Ms Greening will be welcomed by many as transport secretary, especially given her support of green taxes whilst at the Treasury and her background as a campaigner against Heathrow expansion.

She faces several challenges in her new role – the planned increases in rail fares threaten to price people off the trains; cuts in bus funding are causing real damage to the local bus network; and there are parts of government and some local authorities clamouring for a renewed road building programme.

Other challenges she faces include making sure high speed rail actually helps cut carbon without taking away funding from the rest of the rail network, coming up with a coherent rail strategy and developing a new plan for aviation.

But one of her first challenges will be which local transport schemes get funding from national government – will she invest in public transport, or spend yet more on road schemes that lock us into dependency on foreign oil imports and add to carbon emissions?