Tory MP Daniel Kawczynski, who made money out of a book on Colonel Muammar Gaddafi, has demanded the Libyans pay Britain back for the costs of their liberation. 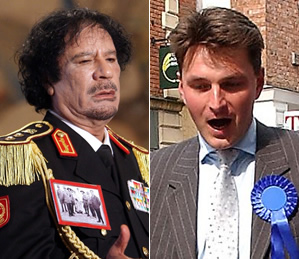 A Tory MP who made money out of a book on Gaddafi has demanded the Libyans pay Britain back for the costs of their liberation.

Daniel Kawczynski, who filled his boots with the proceeds of “Seeking Gaddafi”, appeared on the Victoria Derbyshire show on BBC Radio Five Live this morning calling for Libya to pay Britain back the £300 million cost of the war.

His reason? Disquiet amongst his constituents at:

“…the prospect of when they have local libraries being closed and pressure on public services as a result of the economic difficulties that our country are facing, they find it difficult to comprehend how we could be spending this amount of money abroad in pursuing the liberation of Libya whilst having to make cutbacks in our own country.”

Never mind the principle that the intervention was to save Libyan lives because it was the right thing to do, not because we thought we could get some money back off them, the unconscionableness of Kawczynski’s position is made even worse by his having profited from the Gaddafi regime through his book; rather than demand money back from the Libyans, would it not be better for him to give them some of the money he’s made out of his “Seeking Gaddafi” tome?

The Libyans, though, shouldn’t hold their breath – this is a man who, as Guido Fawkes revealed this week, is as tight with the purse strings as they come:

His new book is on Saudi Arabia, and with the prospect of travel to the country, Guido can see why the job might be attractive to any budding young writer. But let him warn you, if Kawcynski’s past behaviour is anything to go by, this is nothing but a con…

When writing his last tome, Kawczynski held a similar recruitment process and sources suggest that there was possibly one intern “hired” for each chapter. Interns he “hired” were under the impression that they were the only one.

Strangely many had a similar interview that ended up with them being asked to write a five thousand word essay on a particular Gaddafi-related angle. Those subjects bear an uncanny resemblance to the “Seeking Gaddafi” chapter list…

Weirdly, the writing style in the book isn’t what you might call consistent…

Let us hope this greedy, selfish money-grubber doesn’t make any more money out of the Libyans – or interns – ever again.