The National Union of Journalists has said English Defence League thugs attacked journalists at the weekend in a series of violent assaults, reports Shamik Das. 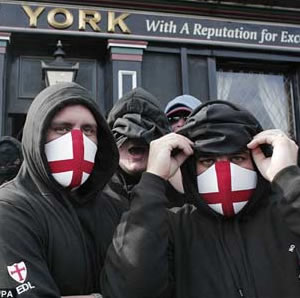 The National Union of Journalists has said English Defence League thugs attacked journalists at the weekend in a series of violent assaults – including a sexual assault and a photographer being set on fire. The police have arrested 60 people following clashes between police and the EDL in east London at the weekend, when 1,000 EDL supporters defied a ban to gather in Whitechapel.

“Following the EDL event in East London, the union has received numerous reports of harassment, threats and abuse including physical assaults, racist abuse, bottles and fireworks being thrown at the press and photographers being punched and kicked.

“One journalist was subjected to a sexual assault and another NUJ member suffered minor burns after an EDL supporter used a flammable accelerant to set the photographer on fire.

“Violence directed towards journalists who are simply doing their job is totally unacceptable and the deliberate targeting of journalists by the far-right is a violation of press freedom.”

NUJ general secretary Michelle Stanistreet called the attacks “an appalling abuse of press freedom” and an attempt by the EDL “to deter journalists from carrying out their work”, adding:

“These attacks are designed to intimidate NUJ members and those in the local community who are determined to stand up to far-right groups. The police need to take decisive action to ensure that the thugs who attacked journalists during the EDL protest are identified and prosecuted.”

“These attacks are just the latest in a long history of violence, threats and even fatwas issued against the press and there is only one reason behind them all – to intimidate and deter the media exposing the violent and racist behaviour of the far-right.

“An attack on the press is an attack on press freedom and on our democracy.”

Last Friday, the NUJ had warned of their fears the racists could turn violent:

“At previous events there have been examples of verbal threats, intimidation and physical violence including an NUJ member being punched in the head. There have also been instances of attempts to seize cameras and smash equipment and journalists have been targeted on far-right hate websites such as Redwatch.

“The Casuals United group, one of the organisations supporting the protest on Saturday have used their website to warn photographers: ‘Whinging left wing idiots – you wanna film the protests for hostile purposes, you accept the anger you clowns.’

“Far right threats are designed to silence the media and stop NUJ members showing the true nature of the protests and protestors.”

Further proof if it were needed that the EDL, far from being “non-violent”, as their leader Tommy Robinson, aka Stephen Yaxley-Lennon, the former BNP member jailed for a year for assaulting a policeman, claims, are nothing but violent, racist thugs who should be treated no differently to the BNP.