The riots have been greeted with alarm, division in Scotland and criticism of cuts in Wales 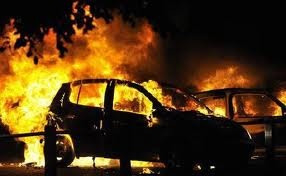 As the Prime Minister formally announced that water cannon, based in and only ever used in Northern Ireland would be available to combat riotous activity on the UK mainland within 24 hours’ notice,  Jimmy Spratt, a DUP MLA and a former head of Northern Ireland’s police federation has warned that they would be ineffective in combatting the scenes witnessed on UK streets over the past week.

Outlining is caution against their use, the Belfast Telegraph has quoted Spratt as saying:

“It is not workable at all. There are several points, including the size of these vehicles.

“The big issue would be manoeuvrability. They are suited to operating in a wide space, where police are faced with a crowd of rioters.”

It comes as the Police Service of Northern Ireland (PSNI) has confirmed that following a request by the Police National Information Co-ordination Centre (PNICC), it is to provide the Metropolitan Police with a number of its reinforced land rover vehicles, such an iconic image of the troubles in Northern Ireland.

Confirming the move, a spokesperson for the PSNI explained:

“PNICC have been in contact with all UK police services assessing what resources are available to deal with the current situation,” the PSNI spokesman said.

“We are currently reviewing how and where we may be able to provide support to our colleagues in line with their requests. At this stage, due to operational commitments, we are unable to provide any officers, however, we have offered a number of Land Rover vehicles for assistance.”

Meanwhile, as the debate over police tactics continues, one former RUC and PSNI Detective Chief Superintendent, Norman Baxter as dubbed the Met’s tactics as ”primitive”. Quoted in the Newsletter he argues:

“I have heard the Met talking about how effective it had been to drive armoured cars down streets where there was rioting.

“But those are tactics we were using in Northern Ireland in the 1980s if not the 1970s.

“They are very ill-equipped for this, with short circular shields being used by officers as opposed to the long shields used by the PSNI.”

In Scotland meanwhile, Lib Dem Leader, Willie Rennie has accused First Minister, Alex Salmond of “seeking narrow political advantage out of the misery of others” following an interview on BBC Radio Scotland by Salmond on the issue of the riots.

Outlining his concerns at the media’s use of the term “UK” riots, the First Minister argued:

“We know we have a different society in Scotland, and one of my frustrations was to see this being described on BBC television and Sky as riots in the UK.

“Well, until such time as we do have a riot in Scotland, then we’ve seen riots in London and across English cities. It’s actually unhelpful to see them inaccurately presented, because one of the dangers we face in Scotland is copycat action.”

In his response, Scottish Labour Leader, Iain Gray raised his concerns at the First Minister lack of solidarity with the communities left devastated by the riotous actions, arguing:

“The first minister’s reaction to the riots is small-minded, and embarrassing if he really thought the most important thing was that they should be called ‘English riots’ on TV.

“Surely he could have seen his way to expressing solidarity with the communities devastated by this criminal violence first and foremost?”

In Wales meanwhile, after what police described as “isolated incidents”, First Minister, Carwyn Jones, having outlined how is Ministers were keeping in close eye on developments across England called on Welsh communities to show restraint, concluding:

“What’s important is that what we’ve seen in some of the cities in England is that it stops and that people are able to go about their daily lives. I hope, of course, in Wales people have more respect for each other in their communities where they live.”

And as MP return to Westminster for a recall of Parliament, at least one Welsh MP looks set to be raising the wider issue of police cuts. Speaking ahead of the session, Labour’s Alun Michael, MP for Cardiff South and Penarth, a former Home Office Minister and member of the Home Affairs Select Committee said of the Government’s cuts:

“We’ve always said on the Labour side that these cuts were coming too fast, they were deeper than were necessary.

“They’re front-loaded, which gives enormous problems to the police in having to maintain the services and the response that the public expect, they aren’t really helping to restore and redevelop the economy and I think the government should think again, not just because of the events of the last few days but because they’re getting it wrong from the beginning.”

5 Responses to “Riots – the view from the devolved nations”