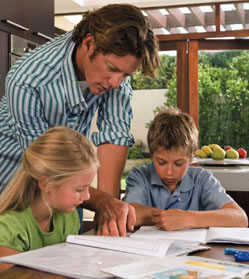 There’s an interesting report (pdf) out today from the Joseph Rowntree Foundation looking at ‘minimum income standards’. Written by Professor Donald Hirsh, a leading expert in the field, it looks at the income a typical family needs to achieve a minimum socially acceptable standard of living.

The report finds that the cost of ‘Minimum Income Standard’ is about 5 per cent higher in 2011 than in 2010. That’s partly because earnings have risen more slowly than inflation.

But it’s also the result of reduced government support, in particular cuts to the childcare element of Working Tax Credit.

The report has a few implications for policy that don’t always get the credit they deserve in our public debate.

That’s the difference being treading water and drowning. Following the government’s recent switch from RPI to CPI for the indexing of benefits, that will be the reality for many households in the next decade.

Second, support for childcare costs is now an essential prop for living standards for households that are in work and on low-to-middle incomes. As our own recent report (pdf) at the Resolution Foundation revealed, once childcare costs are included, the marginal tax rates faced by second earners and lone parents with young children are punitive.

Yet means-tested government support for childcare costs creates its own problems for families looking to raise their own incomes through work. With Tax Credits withdrawn as earnings rise, some families end up taking home little of their additional earned income.

In April this year, government support for childcare was reduced from 80% to 70% of full costs. The government is widely expected to reduce support further when the Universal Credit is introduced.

As the Chart 1 below shows, under the new system being considered, a single parent on the minimum wage could take home as little as 36 pence from every additional hour they work. That translates into an effective tax rate of 94 per cent.

That raises immediate problems for the families hit – would you work for 36 pence an hour? Standing back, though, the decision to reduce support looks particularly ill-judged; in a context of weak wage performance it’s hard to imagine a worse time to reduce households’ ability to raise their income by moving an extra adult into work. 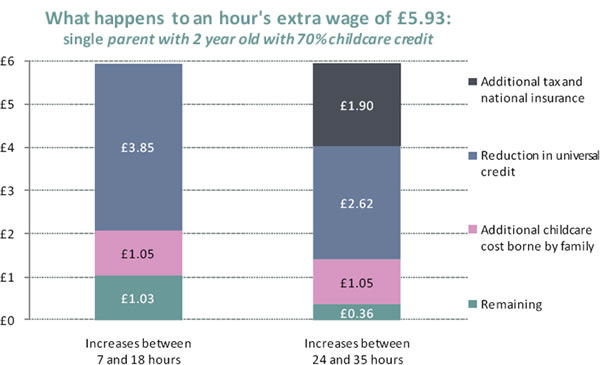 Finally, the report reminds us that transport costs are far more important than is typically acknowledged in our public debate. In rural areas in particular they make up a big slice of the family budget. That matters not just for day-to-day living costs but also for longer-term aspirations.

At a recent focus group we held at the Resolution Foundation to understand the current squeeze on living standards, transport was one of the main issues raised by participants. Several said they felt ‘trapped’ between a housing market that forced them to move further from work, and the eye-watering costs of commuting.

Unlike in the case of childcare, policy is under-developed when it comes to supporting certain households who are really struggling with transport costs – and for whom these costs might be a significant barrier to work. If transport costs, from fuel to rail travel, continue to outpace headline inflation, that may need to change.

19 Responses to “How hard is it for families to keep their heads above water?”