Politicians refuse to tell the truth to voters, when they say that immigration is the cause of persistently high worklessness, writes Declan Gaffney. 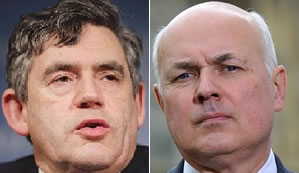 ‘British jobs for British workers’ was one of the most idiotic slogans ever voiced by a Labour leader, combining economic illiteracy with staggeringly inept political opportunism. With that simple phrase Gordon Brown mobilised a misleading association between two of the most poisonous issues in UK politics – migration and benefit receipt – which blew up in his face.

It also handed the Conservatives the basis for a narrative on employment under Labour which has gained widespread acceptance despite being demonstrably false: all the growth in jobs went to migrants leaving out-of-work benefit receipt unchanged.

Back in 2009 the then leader of the opposition David Cameron quite rightly said:

“The Prime Minister should never have used that slogan. On the one hand he lectures everyone about globalisation and on the other he borrows this slogan from the BNP. He has been taking people for fools and has been found out.”

But if the Conservatives have avoided the slogan, they have never ceased to deploy the flawed reasoning behind it to trash Labour’s record. With Iain Duncan Smith’s speech in Madrid yesterday, ‘British jobs for British workers’ is back on the agenda.

The precedent was not lost on the editorial writer for that morning’s Daily Mail:

“Of all the broken Labour promises, few have turned out to be more hollow than Gordon Brown’s commitment to provide ‘British jobs for British workers’. Migrants allowed unfettered access to the labour market grabbed the lion’s share of new jobs while our unemployed, many of them school-leavers, were consigned to a life of welfare dependency.”

The Express was similarly supportive:

“For so long as Britain’s labour market is open to all-comers from dozens of other countries, the chances of getting our own long-term unemployed into work will be greatly impaired.”

There is little point in arguing with statements like this, which are related to labour market economics in much the same way as astrology is related to astronomy.

The table below shows what happened to employment and benefit receipt under the last government.

To claim that migration prevented welfare receipt from falling is to offer an incoherent explanation for something that didn’t happen.

Migration can affect benefit receipt, but not in the direct manner assumed in the musings of armchair labour market experts. Under certain circumstances, migration can affect wages and this can have knock-on effects on employment: you can read the theory here.

But studies of the impact of migration in the UK have found no or very slight negative impacts on wages for ‘native-born’ workers. So if there are any impacts from migration through lower wages to lower employment and thus higher benefit receipt, they are insignificant compared to the other factors which drive worklessness.

But this sort of detail is beside the point. The welfare/migration myth doesn’t involve even rudimentary economic theory. To borrow David Cameron’s words, it takes people for fools. We will have to see whether his minister will be ‘found out’. It seems unlikely, as the opposition, whose job this would be, have saddled themselves with their own version of the same myth.

The enduring mystery about ‘British jobs for Britsh workers’ is how and why Labour came to believe that it could dip into this know-nothing political territory without causing lasting damage to its reputation on employment and welfare.

28 Responses to “When will politicians stop taking the public for fools on immigration?”