The government’s argument for abolishing EMA was blown out of the water as the lead researcher of a key report says it was misrepresented, writes Save EMA's James Mills. 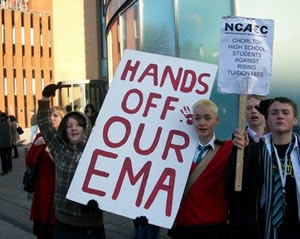 Yesterday the government’s whole argument for abolishing Education Maintenance Allowance was blown out the water. The Education Select Committee in Parliament, who are currently looking into the government’s decision to abolish EMA received evidence from Thomas Spielhofer of the National Foundation for Educational Research.

He was the lead researcher on the report Barriers to Participation in Education and Training (pdf), which is what the government has based its decision to abolish EMA on and it is the cornerstone of the government’s whole argument on “deadweight”.

He started by declaring that “the research has been misrepresented in many ways”. He made it clear that his research “was first and foremost not about EMA” and that they “only had one question that referred to EMA”.

And that he never thought that his report would lead to the abolition of EMA, and was not happy that it did, especially without the government even asking for his opinion:

“It happened without any discussion with us…”

So the government didn’t even consult the report they constantly quote.

On the issue of “deadweight”, when asked whether he was “happy with the concept that EMA has a deadweight cost of 88 per cent”, he said “no”. He also replied that it was “completely correct” when asked if he was unhappy that the change in government policy had been based on his research.

This is clearly quite damming criticism.

Mr Spielhofer went further to make it clear he was not happy about the 88% figure being described as “deadweight”, saying:

“You can interpret that in different ways. You can interpret it quite negatively, and say that for 88% that was wasted money, but I don’t actually see it that way, I think it has been misinterpreted in that sense.”

“I think the 12% is quite a worrying statistic…”

Asked whether he agreed with the government that EMA has a deadweight of 88% he said “no” and made it clear that out of the 88% who said they would stay on with their courses, they “simply didn’t know” if they needed it and how taking EMA away would affect them. In other words they may want or have the desire to do their course but that does not mean they can.

He further acknowledges that the survey was not weighted to represent the 80% of EMA recipients who are from household incomes below £21,000 a year:

“We didn’t ask how much they were receiving so many could have just been receiving £10.”

He gave the analogy of free bus travel for people over 65 and said you wouldn’t use the same argument for abolishing EMA to abolish the free bus pass, something which the Tory chair of the select committee, Graham Stewart MP, said would also be a “good idea”.

Mr Spielhofer then slammed the government replacement for EMA, the Discretionary Support Fund, by saying that, as it was discretionary, many students “would think that they wouldn’t qualify and wouldn’t apply”.

Rather worryingly he added it was “the most vulnerable who will be the hardest hit” and it may push many of them into trying to enter the workplace in unskilled jobs without training, which will be hard at a time when there are no jobs. Something Save EMA has constantly warned is not a long term sensible economic plan as the number of unskilled, unqualified jobs in our economy diminishes by the day.

The government’s response to all this on the BBC has been to say there is a “range of evidence” for scrapping EMA, but as the prime minister and Michael Gove have used this “deadweight” figure continuously one has to wonder where is this additional research?

This is very damaging to the government and the education secretary as it destroys their entire augment for scrapping EMA – and comes only a few months before colleges and students start their courses.