Andrew Lansley's health reforms will be significantly amended, in response to the misgivings expressed by healthcare professionals and many Liberal Democrats. 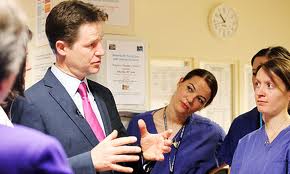 Reading through the government’s response to its ‘listening exercise’ on NHS reforms, three things stand out.

Firstly, it’s clear that the reforms proposed by Andrew Lansley in the Health and Social Care Bill will be significantly amended, in response to the grave misgivings expressed by both healthcare professionals and Liberal Democrats at our conference in March.

From ensuring that decisions about the commissioning of services remains a transparent, public function involving doctors and nurses across the clinical spectrum, to preventing the promotion of competition ahead of integration by Monitor, the changes are a significant acknowledgment that the reforms were unworkable.

There will be a number of other welcome changes to the bill, and I’ll return to the question of the likely political fallout from these changes later.

Secondly, it’s clear that in its response to the NHS Futures Forum report, the coalition has left some questions unanswered.

A key demand of both clinical professionals and Lib Dems was that the duty-based role of the Secretary of State be restored; although the government announced yesterday that this role would revert to having “ultimate accountability for securing the provision of services”, it remains unclear whether this amounts to retaining the secretary of State’s statutory “duty to provide” a comprehensive and universal service enshrined in the NHS since its foundation.

Furthermore, questions remain over the introduction of choice and competition. Monitor will no longer be a purely economic regulator, and we should welcome moves to “remove Monitor’s powers to ‘promote’ competition as if it were an end in itself”; nonetheless the apparent decision to “emphasise commissioners” duty to promote choice, and the absence of any mechanisms to enhance the capacity of the vulnerable to exercise that extended choice, is of great concern.

Thirdly, yesterday’s pronouncements will not be the yardstick by which the NHS reforms will be judged. To fully assess the extent of the turnaround, we must await the amended legislation as it returns for parliamentary scrutiny at committee stage. Beyond this, we must judge the coalition government’s record on healthcare not just on procedural and legislative details, but on the outcomes these bring about on the ground.

As the chaotic dismemberment of Primary Care Trusts has shown, the opportunity cost of massive reform, not least at a time of severe budgetary constraint, is significant – so no matter what changes are made to the bill, great care must be taken that in reaching for an improved NHS we don’t dismantle the very tools needed to achieve that improvement.

Care also needs to be exercised in furthering the last government’s ‘choice agenda’ in the absence of clear evidence that choice and competition ipso facto improve outcomes.

So what of the political fallout from the changes? Labour’s trite assertions of privatisation, from a party that paid millions to private companies – often for not actually performing procedures for the NHS, leaves it apparently arguing for fully public provision of healthcare when, during 13 years in power, they did so much to introduce market reforms and private provision.

Mr Lansley’s position is either fatally weakened or immensely strengthened depending on who you speak to – either way his reforms will be diluted not ditched, and the Tories have huge questions to answer over the shambolic way they’ve handled the politics of NHS reform. As for the Lib Dems, Baroness Williams and Nick Clegg have been very clear – the amendments to the bill reflect most of the demands we made at conference, and can be seen as a clear victory for the party.

There’s no doubt that the majority of our concerns look likely to be met, but as I laid out above, question marks remain and must be clarified at committee stage.

Beyond the bill, the Lib Dems also need to set out our own vision of what a liberal (and liberty-enhancing, but that’s another post…) NHS would look like – for now we can be pleased that this misguided bill will indeed be gutted.