Ed Miliband’s speech marks something new, and suggests a significant shift. So what does this responsibility mean when it comes to those at the top of society? 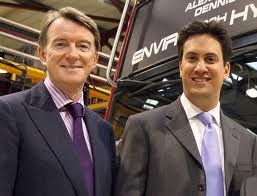 The concept of rights and responsibilities, which characterised Ed Milliband’s speech yesterday, is nothing new. “Rights and responsibility” was something of a buzz phrase while Labour were in power. However, while New Labour became increasingly shrill about the need for responsibility at the bottom of society – benefit “scroungers” were a problem that needed to be tackled – those at the top seemed to just be enjoying the rights.

In this way, Ed Miliband’s speech marks something new, and suggests a not insignificant shift. So what does this responsibility mean when it comes to those at the top of society?

It means an end to the “the take what you can culture”. In the recent High Pay Commission interim report (pdf) we drew attention to the role of social and political factors in contributing to the growth in pay at the top, which is currently seeing the top 0.1% take home 5% of national income.

It should surprise no-one that a politics which gave rise to the phrase “greed is good” also led to an explosion in pay at the top. A loosening in hostility towards conspicuous consumption and a rise in individualism are part of this trend.

These changing attitudes are clearly exemplified in the 2010 British Social Attitudes Survey, which demonstrates a rise in individualism. This can be seen in an increase in the willingness of the public to attribute blame on the individual as opposed to the unfortunate circumstances – a growing number of people blame poverty on laziness rather than social factors or bad luck – and a hardening attitude towards the poor.

It is significant that he also recognises the difference between the company man, and the risk-taking entrepreneur. This adds an important nuance to Peter Mandelson’s much quoted statement that New Labour were “intensely relaxed about people getting filthy rich”. People who take personal and financial risks to set up a business, which creates jobs and economic growth, are not seen in the same light as the steward of a large publicly listed company.

But perhaps the most significant element of the speech is the fact that he acknowledges:

“The difficulty in creating a responsible society when there is a huge gap between the rich and everyone else. When people lead parallel lives, living in the same town but different worlds, we should not be surprised that it’s hard to nurture a sense of responsibility and solidarity.”

Here Ed Miliband draws a firm distinction with what came before him in recognising that the gap is the problem. He is not alone in this opinion as Richard Lambert, former director of the CBI, stated:

“If leaders of big companies seem to occupy a different galaxy from the rest of the community, they risk being treated as aliens.”

10 Responses to “What does responsibility actually mean to those at the top?”