Labour's Katy Clark writes on police abuses of power in recent years and why the HMIC may be limited in what they will and can do, and in the people's trust. 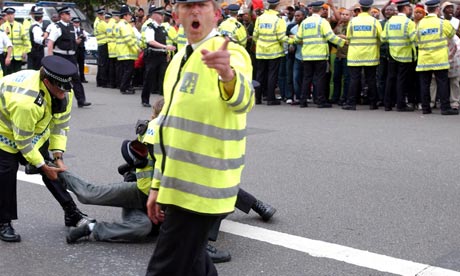 Katy Clark is the Labour Member of Parliament for North Ayrshire and Arran. This story will feature on tonight’s edition of BBC Newsnight.

A few months ago many were utterly stunned to hear revelations that PC Mark Kennedy had been deployed for seven years, on a multi-million pound budget, to infiltrate the lives of environmental activists. It quickly became clear that Mark Kennedy was nothing more than a node of an extensive network of undercover operatives built up over the years by the secretive National Public Order Intelligence Unit.

Their very existence angered many, but the political spectrum was united in rage when it emerged that undercover officers had frequently engaging in multiple incidents of sexual misconduct, had been aiding and financing direct actions to close down roads and power stations, and had whittled away millions of pounds of public money on fast cars and plush restaurants without any democratic oversight. We also now know that critical evidence relating to undercover officers was withheld from defence counsels during the trials of environmental campaigners.

At a hotel in Covent Garden those conducting an HM Inspectorate of Constabulary’s review into undercover policing are hosting a two hour session, over free lunch and coffee, to give those personally affected by undercover police operations an opportunity to share their experiences and views.

It is no surprise that many protesters affected by undercover policing are choosing to stay away.

Protesters have been let down by HMIC before. Following the brutal policing at the G20 demonstrations in 2009, which led to the unlawful killing of Ian Tomlinson, HMIC undertook a review and concluded that the impact of kettling needed to be “moderated”. This was hardly the strongest condemnation of a tactic that we now know was deployed illegally at the G20 demonstrations. It did lead to the absence of kettling for a few months, but it only took a fresh faced anti-cuts movement for the tactic swung straight back into use with ever more regularity and extremity.

HMIC’s weak words and lack of influence did nothing to help the school children contained for several hours without access to food and water on one of the coldest days of the year. So there is little hope the inspectorate will do anything to help the huge number of political campaigners who have had their privacy grossly invaded for so many years.

Part of the problem is that while HMIC are self-described as independent, this is far from the truth. Any meaningful inquiry must probe the decisions and actions taken by senior officers, rather than just the antics of undercover operatives on the ground. This is vital as evidence already suggests that behaviour such as sexual misconduct was a tactic systematically deployed with the blessing of those in charge. Therefore, it is clear to see why senior officers investigating other senior officers is far from ideal.

HMIC’s inability to dig deeper than is comfortable for the police, is clear from the terms of reference they have set themselves. These were only made public weeks into the review, following pressure from my parliamentary colleagues. They focus on internal policing issues of police management and administration, but fail to ask the wider moral and ethical questions relating to a person’s right to privacy and freedom of expression.

Finally, what will be done with the review’s findings upon its conclusion? Who will read them and, crucially, who will take action? I have twice requested in the Commons that Theresa May make a statement upon the review’s conclusion, but so far not a word has passed her lips (in public) on undercover police and protesters.

The secretive nature of the undercover policing of protesters makes it all the more frightening. How are the public meant to know whether or not they will be spied upon if they take up their democratic right to protest? If the statutory body responsible for inspecting the police fails to ask the relevant questions then parliament must push for a thorough, public, and genuinely independent inquiry. It is the first duty of parliament to protect its citizens, and right now many of them certainly don’t feel protected by the police.