Ed Miliband called on David Cameron to sack Ken Clarke today after the justice secretary's remarks about rape in a BBC radio interview this morning. 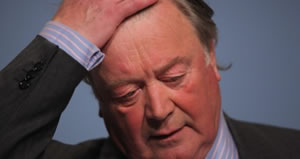 Clarke made his controversial comments in an interview with Victoria Derbyshire on BBC Radio Five Live.

To the shock of his interviewer, he spoke about “serious rape… rape in the ordinary conversational sense”, claiming it was different from “date rape”.

Then, when Derbyshire said “rape is rape, with respect”, he replied:

Listen to the key excerpts:

“You cannot suggest that there is somehow a category of rape in which somehow the woman is willing. Unless he changes his view very rapidly of course he’s got to go.”