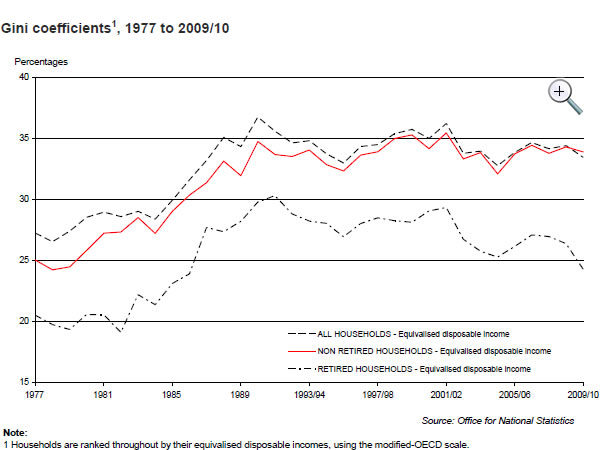 “Inequality of income increased in the late 1980s and late 1990s, and on average has remained at broadly the same level since. Smaller changes in the level of inequality are observed in the period from 1990s to date. The Gini coefficient for disposable income in 2009/10 was 33 per cent, a fall of one percentage point on its 2008/09 value, therefore indicating a fall in inequality of income.

“The fall in inequality was driven mainly by retired households, for whom inequality fell by two percentage points in the latest period, and by three percentage points between 2007/08 and 2009/10. Further ONS analysis of the effects that taxes and benefits have had on inequality since the 1980s is planned for publication in June 2011.”

While the reduction of child and pensioner poverty was a key aim of Labour’s time in office, the party never made income inequaltiy an explicit goal.