The OECD has warned the government about the impact of spending cuts on child poverty. They argue that "Sustained early years investment is needed to meet the UK’s child poverty targets". 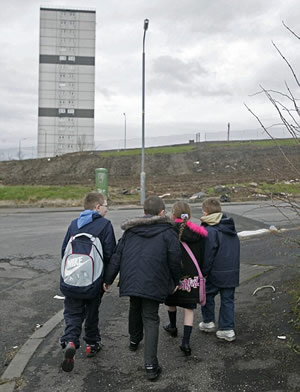 The OECD has issued a stark warning to the government on the impact of its cuts on child poverty levels. The report argues that “Sustained early years investment is needed to meet the UK’s child poverty targets”.

The Coalition Programme committed the Government to continue Labour’s goal of “ending child poverty in the UK by 2020”. But the OECD has warned that progress, which has stalled since the financial crash, is threatened by spending cuts. The report, published yesterday, says:

“Between 2003 and 2007 the UK strengthened its position as one of the biggest investors in families in the OECD. Early years spending rose substantially, driven by new cash supports for children around birth and increased investment on childcare services. Today, spending cuts, such as cutting benefits for pregnancy and childbirth, and a freeze on child cash benefits, will affect many families…

“Before the financial crisis, and during a period of increased investment (1995 to 2005), child poverty in the UK fell more than in any other OECD country (in 2005 it was 10.5%, down from 17.4% in 1995, compared to an OECD average of 12.7%); in the same period the growth in average family income was third highest in the OECD. Progress in child poverty reduction in the UK has stalled, and is now predicted to increase, and so social protection spending on families – particularly via family service provisions, as a longer-term solution to poverty risks – needs to be protected.”

One of the report’s authors, Dominic Richardson, told PA, “There is room in UK policy for an effective childcare supplement for working parents“. But the Government has cut the childcare element of the Working Tax Credit by up to £30 per week for working families.

The main OECD report – which contains a treasure trove of information on families – found that across the rich world, there has been a sharp increase in the proportion of births outside marriage since 1980 (Figure 1.6). The report notes that:

“Many people now get married after having children or have children without getting married. This has resulted in a sharp increase in the number of children being born outside marriage: the OECD average tripled from 11% in 1980 to almost 33% in 2007. The rate is particularly high among Nordic countries, with Norway, Sweden and Iceland having more births outside of marriage than within.”

The finding places a question mark behind the rationale of the Coalition’s plans to “introduce transferable tax allowances for married couples” – a policy which came repeatedly under attack during last year’s general election campaign.